I feel like I’m going to open a can of worms with this one but I think we have to talk about the idea of a narcissistic twin flame. So I’m just going to dive right in.

Quick disclaimer: I constantly say this but it’s alright to disagree over elements of the twin flame journey. Not everybody shares the same beliefs and I’d generally be pretty wary of anyone who speaks in certainties. I don’t want my inbox turning into a flood of hate mail so bear with me on this one and remember I’m speaking only from my experience and the thousands of stories I hear on the site.

I’m not trying to hurt anyone’s feelings, but there’s some confusion and overlap here. Understandably so, but we’ll get to that.

So, let’s begin with a harsh truth.

Can a Twin Flame Be a Narcissist?


Simply put, no. But hear me out for a moment.

I spend a lot of time around the twin flame communities (too much time as my own twin is fond of joking) and I see a huge misuse of the term ‘narcissist’.

I’m not trying to belittle anyone or be patronizing but the distinction here is important. Especially when it comes to a twin flame relationship (and important enough just for a healthy romantic relationship).

It’s a clinical term. A personality disorder that has been bastardized and squashed into general use to describe toxic relationships. We’re so quick to jump to this label that it’s causing real problems.

A true narcissist has a lack of empathy (so, basically the polar opposite of a Heyoka empath twin flame). A damaged soul is unable to connect with themselves, let alone anyone else. This is just completely out of sync with the twin flame connection. I’ve never seen a case of a real twin flame partner having this disorder. Again, I might be wrong and I’m certainly not saying they can’t find a romantic partner or find a happy relationship.

A twin flame, especially in the earlier stages of their journey, is likely to express some of the same traits (we’ll talk about that more in a moment) and automatically writing someone off for this is not going to be helpful.

There are two main problems as I see it.

One of the more common symptoms of a toxic relationship with a narcissist is it’ll be intense in the beginning and then they’ll withdraw. Quickly. Is that ringing any bells for anyone?

If you haven’t already read it, I heavily suggest looking at the guide on twin flame separation. A proper understanding of the purpose of separating from your mirror soul makes the journey a lot easier.

Even if you do understand what’s going on here, it can be hard to tell the two apart. Are they a narcissist just playing with you or is it a twin flame runner suffering from soul shock?

This can manifest in many different ways and, sadly, that includes a twin flame ghosting you and running for the hills without warning. I see this often enough with readers that it’s hardly surprising we mistake them so often with narcissistic behavior.

So, you need to be able to tell them apart.

How to Tell a Narcissist vs a Twin Flame: Spot the Signs 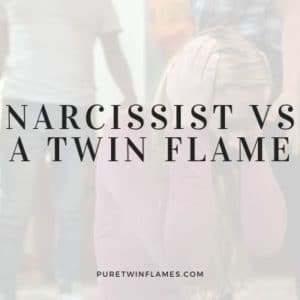 I wish there was an easy way to do this. A twin flame reading or meditation might help shine some light but this is going to be a highly personal thing.

A lot of these signs could be mistaken for the twin flame journey as well. It might be subtle things you look out for and this is far from an exhaustive list but some of the main signs I’d watch out for:

They Keep a Distance

You’ll often hear a runner give you (and themselves) a reason why they’re not ready to be together.

These are things I often see on a true twin flame journey. Where the difference comes in is when these toxic excuses don’t budge at all.

Sometimes the separation phase ends with a bang, sometimes it’s a gradual process. If you see an endless narcissistic supply of excuses without any improvement in the long run that they’re actively trying to work through these things – they’re probably not your twin flame.

You Make Excuses for Them

I love my twin dearly, but sometimes he is a goof and I have to excuse his antics to my friends when he puts chopsticks in his mouth and pretends to be a Walrus in a fancy restaurant.

Yes, he’s watched too many episodes of FRIENDS. No, these aren’t the kinds of excuses I’m talking about.

Some parts of the journey do suck. Especially in the earlier stages. But if they are consistently and willfully making you feel bad about yourself and then you find yourself excusing their behavior (either to yourself or to others), then we have a problem.

They’re Cheating on You

The idea of a cheating twin flame is up for debate and there are absolutely cases I see daily where false flames and societal norms cause issues here.

If you go through a period of separation and they’re seeing other people that doesn’t mean anything. Painful, I know, but it doesn’t make them a narcissist.

What you do have to look for is if they’re sneaking around behind your back in the process. If they’re flaunting it in your face or actively playing with you.

Again, I’m wary about this question when it reaches my inbox and I often answer the same way.

We have to be careful of the label here. The twin flame journey can result in some mistaken traits of narcissism ending. It’s a journey of development, growth, healing and coming closer together.

If you’re mistaking symptoms of running or soul shock as the actions of a narcissist, then, yes, these can fade over time.

What I’m wary about is finding the balance here. Getting caught up with a karmic partner in the hope of them changing seems to be becoming a trend. A worrying one.

I’m going to have to talk about this. At least for a moment.

I don’t like dwelling on the negative aspects of the twin flame journey. While it’s not always a rose-littered path, I think the benefits wildly outweigh the downsides and I like to focus on being proactive in helping people reach union as quickly as possible (thus the twin flame coaching).

While the journey is certainly not new (I’ve touched on the origins of twin flames) the rise of the internet and social media has allowed us all to connect in ways we haven’t been able to before. It’s led to a rise in understanding of the spiritual journey.

For the most part, this is great news. It’s going to help more people further their spiritual progress and give them support and knowledge they wouldn’t have had access to before.

Unfortunately, I see a growing number of people trying to take advantage of the twin flame community and a narcissist is very capable of appearing to be a twin flame and taking advantage of someone. Especially someone searching for their mirror soul.

In the early stages, they’re going to keep up this charade. They’re going to appear like the real thing but they can’t keep this up and the relationship is going to become toxic.

Sadly, I have no easy answer for this. As a community, we’re getting better at weeding these people out but we need to raise awareness of this kind of connection – without mislabelling people in the process. It’s an interesting balancing act that I hope we’ll figure out.

Is a Narcissist a False Twin Flame?

Obviously, I can’t say for sure for everyone reading this but I do know that a real narcissist would be a prime person to be a false twin flame. Their goal isn’t to hurt you (although, yes, that usually happens in the short term) but to help you progress.

This doesn’t mean that someone displaying toxic elements is automatically a false twin soul.

Can a Narcissist Have a Soul Tie?

In my experience, yes. Perhaps it’s part of their healing process to prepare them for something else but there’s a difference between being a twin soul and having a soul tie.

Can My Soulmate be a Narcissist?

Also, in my experience, yes. I’ve covered the difference between a twin flame and a soulmate before but a soulmate can manifest in a lot of different ways, but they don’t share the same soul contracts as mirror souls.

They’re here to help each other and while they’re generally a pretty positive relationship, it’s possible for a soulmate to be a narcissist. This can mean a pretty toxic romantic relationship but it’s not always romantically based and (as soulmates help each other onward) perhaps they’re working through this.