Let’s dig into it because understanding this can save you a lot of time and hurt.

Can Twin Flames Really Cheat? What Counts as Cheating?


Like a lot of the twin flame journey, people disagree. There are those who think it’s impossible for twin flames to cheat on their mirror soul.

I don’t like to get bogged down in semantics and arguments but, let’s put it this way, I get thousands of twin flame stories submitted and I absolutely see people (usually the runner) sleeping with other people during a twin flame separation stage.

I rarely speak in specifics but… yes. They absolutely can cheat.

At least, they can in the sense that we’d normally call cheating in a relationship. Whether it’s physical or emotional, a mirror soul can absolutely be more involved with someone else than they are with you at that time.

There’s a reason false twin flames are such a common topic.

Why Do Twin Flames Cheat? 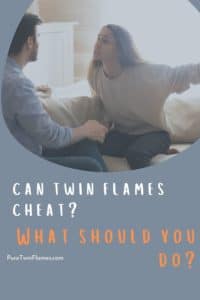 This is one of those how long is a piece of string questions but there are some common trends I see which cause people to cheat.

Often cheating happens in the earlier stages when one (or more likely both) souls still have personal growth to do. Remember, these kinds of deep connections don’t just happen overnight.

Most often the one cheating is the less spiritually advanced soul. The runner gets a raw deal when we talk about the twin flame dynamic but remember they’re most likely acting out of fear and self-preservation. They’re not intentionally trying to hurt you.

They’re probably not aware of what they’re feeling or why it can feel so wrong for them to do it.

The twin flame journey is not a normal or conventional romantic match where two people just happen to be attracted to each other. These are two halves of the same soul coming back together.

It’s kind of hard to even compare the two, but it’s the closest thing we have.

Further down the road, twin flame couples do not cheat on each other. The thought won’t even cross their mind. However very, very few of us will meet our twin at a time when we’re both ready. Triggering each other to improve and to grow is all part of the journey and, often, this happens separately.

At least physically you are separate. Twin flames are always connected at the higher levels and something like cheating on the physical realm in the earlier stages probably barely even registers.

This doesn’t mean it doesn’t hurt when your twin flame cheats on you. I completely understand the pain it can cause if, for example, your twin flame is already married or you’re dating and they sleep with someone else.

It’s worse than a punch to the gut, especially if you’re the more spiritually advanced one. You probably see what they don’t, which means you’re likely to feel the pain of it.

Is My Twin Flame Cheating? 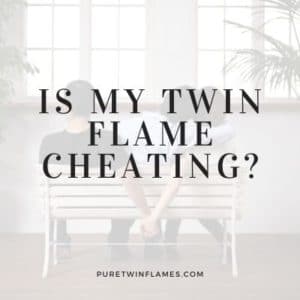 On some level, twin flames are always honest with each other. If you have a genuine fear your twin flame is cheating they might well be. Or it’s a manifestation of your own internal fears and the actual growth needed is your own.

I don’t know you, your twin or your journey (though if you want to tell me about your path so far I can send you a free twin flame reading) so I can’t say for sure.

A period of meditation might help you uncover where these feelings are coming from, however.

Had a Twin Flame Cheating Dream?

If you’ve had a dream your twin flame cheated on you it really doesn’t necessarily mean they have. It’s likely the real meaning of this dream is to draw your attention to your own fear or loss, abandonment fears and work you need to do on your own journey.

Dreams about someone cheating (your twin flame or otherwise) are rarely about the actual cheating.

Can You Feel When Your Twin Flame Is Intimate with Someone Else?

The telepathic bond between twin flames often peaks at periods of heightened energy and emotion. This is why one of the common signs of your twin flame thinking about you is strange moods, energy or emotion out of nowhere.

If you’re hit with an overwhelming feeling of that kind of intimacy with someone else, it can be that physical connection being inadvertently shared.

Danielle, my twin flame betrayed me. We were together for over a year and they cheated with an ex. What do I do?

(Not an exact email since I don’t share stories without permission but I’ve certainly had similar questions often enough).

If your twin flame cheats there’s a couple of things you should do.

Should I Forgive My Twin Flame If They Cheated on Me?

I often say there is no should on this journey but if we truly understand what can cause them to cheat and what it really means: in the scheme of things it shouldn’t matter.

The twin flame journey is so much more than some of the turbulence that happens on the road to union.

What Can Break a Twin Flame Bond?

Cheating isn’t going to be a fun experience for either of you but that’s just short-term pain and part of your journey towards healing.

In the long term, nothing can break the bond the two of you share.

1 thought on “Can a Twin Flame Cheat on You?”