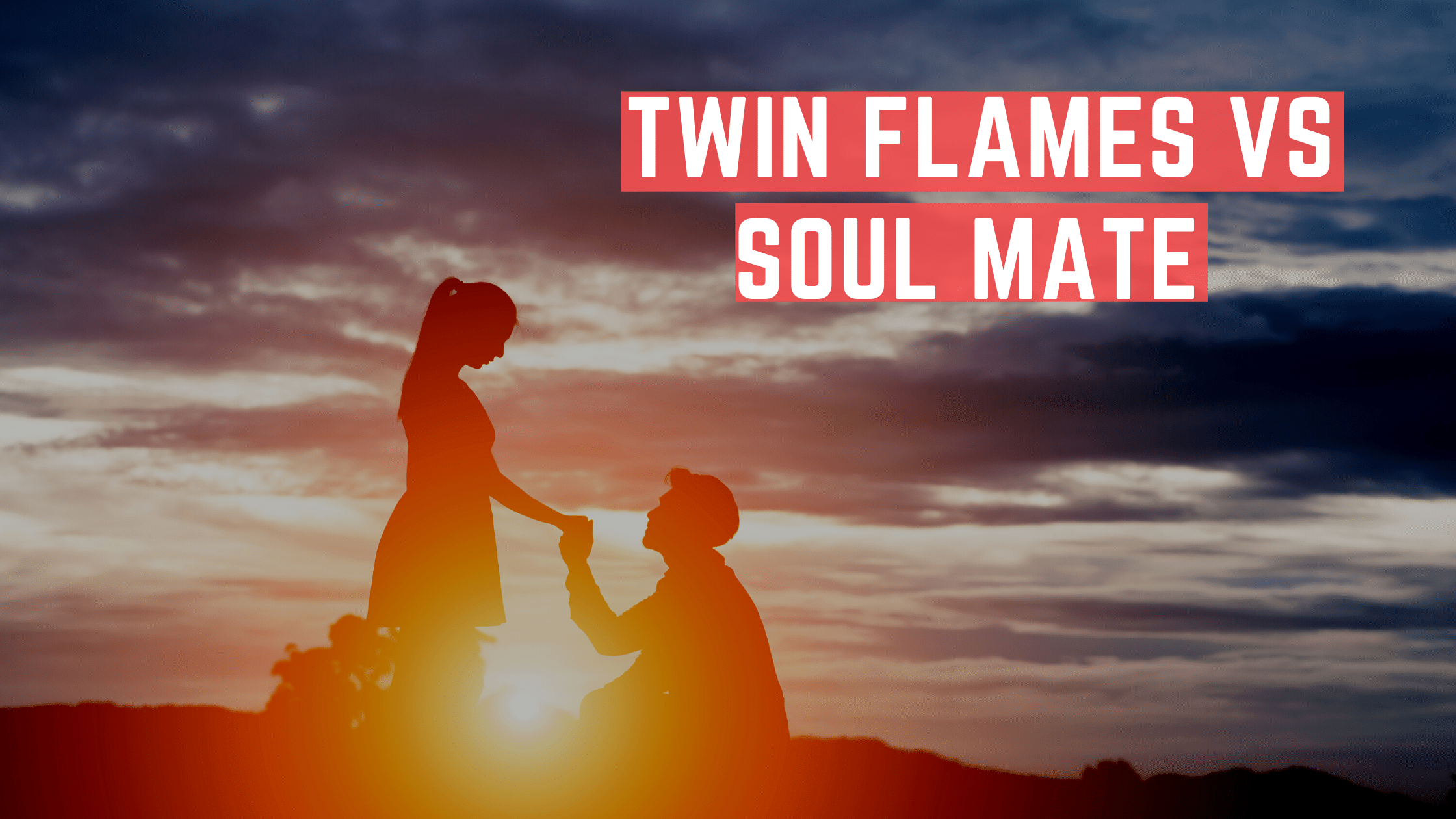 When it comes to twin flames vs soul mate, there are significant similarities and differences that help you differentiate between the two. It’s important to really understand the nature of your soul bond to someone because if you do, you’ll navigate the connection better.

There are significant similarities and notable differences between twin flames and soul mates. There is a strong soul bond in both types of connections. The souls have already met in a number of past lives, and more often than not there’s some karmic stuff to process as a result of that. But the twin flames soul contract includes a prominent divine mission, and all interactions serve that. Twins are connected by an indissoluble energy cord that acts a bit like an elastic band, bringing them together. No matter how far apart they may be. Another significant aspect of the twin flames bond is that there’s a lot of karmic processing and shadow work involved, and it’s a very triggering contract as a result.

If you’re trying to figure out what sort of dynamic you have with someone, you could reach a conclusion by paying attention to your body’s signs.

If you’re dealing with doubt at this stage of your journey, take a minute and get a twin flame reading for some further guidance.

You can look at twin flames as a particular subcategory of soulmates since the broader notion of the two is that of a soulmate.

Both the twin flame and soulmate dynamic involve a strong soul bond. They are both dynamics that involve a love frequency which you share and to which you can harmonize with your soulmate or twin flame.

There’s a blueprint which you take on when you incarnate in any human experience, and that blueprint will involve connections with your twin and/or soul mate. In some blueprints, in fact, the same person can deal with a twin and a couple of soul mates, depending on different variables and scenarios.

Both types of dynamics involve soul contracts which have their own specifics and history attached, and both involve various types of dynamics and interactions as a result. The soulmate’s soul bond is in no way lesser or less significant than the twin flame one, simply different in nature.

In both dynamics, the souls have had past life connections.

There could have been interaction based on a romantic, parental, filial or camaraderie blueprint of love, in both cases. You might have connected with your twin flame or soul mate as parents, children, siblings, best friends or lovers.

There are different blueprints involved in soul contracts, and our human experience selves play them out based on different variables and circumstances. But there’s always that past lives history at play in these soul’s contracts.

Each of those experiences has enriched and supported you both and helped you make more progress along your path towards awakening and ascension.

All past life interactions between souls leave a karmic footprint on their souls. It’s not that likely that the dynamic will have been totally neutral or positive in its nature because human experiences aren’t based on perfection – they’re based on growth. In order to have growth, you encounter challenges. It’s the nature of the game, so to speak.

Both dynamics will involve some karma to process as part of the blueprint that your human experience selves choose to engage in. Both dynamics also give you support and opportunity to process what is there to process and offer you the chance to resolve as much of it as possible.

Though there are similarities between the two notions, there are also notable differences.

Though you share a love frequency in both cases, in the twin flames case it’s a 5th-dimensional unconditional love high frequency – meaning one of the highest ones.

You most likely met a soulmate in previous lifetimes, but your destiny isn’t aimed at meeting them. Your life is enriched by enjoying their presence when you do meet them, but it’s not a goal in itself. A twin flame soul contract involves heavy lifting in the matter of shadow work and karma processing, and the presence of your twin will trigger that, encouraging ascension.

Both types of dynamics involve soul contract interactions. But the end goal of those interactions differs, and the journey to that end goal will be different as a result.

Twin flames incarnate in human experiences with a clear goal to fulfill their divine mission of achieving union and merging. It’s a mission that generally takes several or multiple lifetimes of interaction based on different blueprints.

While soulmates enrich each other’s lives and can help each other fulfill their personal divine missions that they’ve taken on when they’ve chosen to incarnate into the current human experience, their interaction is an added bonus rather than part of the mission itself.

Twin flame souls are connected by an energy cord which makes things a lot more interesting, and often more difficult.

The energy cord acts as a bit of an elastic band, in the sense that the more strained it gets, the harder it pulls the two souls together. That kind of indissoluble bond is specific to twins, and it comes as both a blessing and an issue at different times along the way.

The cord makes the presence of your twin something you yearn for even when your human experience self doesn’t desire it anymore. Your soulmate’s presence will be something beautiful, enriching, but ultimately something you choose to enjoy rather than feel an intense urge to experience.

Processing karma is a big aspect of the twin flame soul contract. For one thing, because the intense nature of the bond triggers a lot of ego aspects and lower frequencies come to the surface in order to be resolved.

The intense nature of the twin flame soul bond also tends to trigger a wide range of lower frequency behaviors as part of the different blueprints the twins choose to play out during the different lifetimes they meet each other. That tends to result in accumulating quite a bit of karma which demands resolving, and it’s karma that can be truly resolved only with that twin flame. Soulmates come into the connection each with their own karma, but it doesn’t necessarily involve one another, rather a more open-ended blueprint of interaction.

The energy cord also brings out a lot of karmic stuff for both partners, and it can get a bit ugly here and there along the way because of that. Compared to that, the soulmates connection can be a much lighter and smoother journey.

A major aspect of the twin flame dynamic is that of triggering shadow work.

While a soulmate will be by your side as you do your shadow work, a twin flame will deal with it themselves through the mirroring of the energy cord. They’re also most likely going to experience the same types of issues, on a similar or different level. So while your soulmate can gracefully hold your hand while you’re doing your shadow work, your twin flame will be down in the trenches with you, dealing with it themselves.

The downside to this is the fact that when one twin flame is triggered because of the shadow work they still need to do, they’re likely going to trigger the other twin flame and their mirroring issues as well. So while both twin flame souls deal with the same type of issue, there will be more tension and hardship involved in the process.

Nobody said the twin flame experience is anything remotely close to easy, right? Not that soulmates have it easy and get only smooth sailing, because they don’t – they’re still sovereign higher dimensional beings having a human experience, just like the twins. But it’s a differently flavored kind of experience.

When it comes to twin flames vs soul mate, the truth is that operating based on the similarities, you’re just as likely to have a very positive, loving, and uplifting experience through the interaction.

The soulmates dynamic is in no way lesser or less important to your human experience self than the twin flame one. It’s simply a matter of dynamics, what sort of energy you each bring into the bond, and what you’ll have to deal with as part of it. Both types of dynamics are meant to help both partners grow and ascend, but it usually helps them get there via different types of avenues. The twin flame bond is more trying and intense because of all the triggering and history between the particular souls, while the soulmates can have a somewhat lighter and smoother interaction (though it’s not necessarily true in all cases!).

It’s important to fully understand the purpose of the love you share so you can both fulfill your soul contract and achieve what you set out to before incarnating in this human experience.