I love talking about the first time twin flames meet because it’s rarely what’d you might expect. So let’s tackle one of the more frequent questions do twin flames love at first sight?

Twin flames feel something at first sight. On the higher levels, both of you recognize each other as twin souls and there’s usually physical attraction and eye contact which stands out. However, whether you (or your twin) recognize this connection as love can be another matter.

Bear with me on this one because it’s probably not as simple as you’d expect.

Do Twin Flames Fall in love at First Sight?


My usual disclaimer here is that every twin flame journey is different. In my experience, most twin flames are going to feel deep levels of connection at first sight. The physical connection usually stands out to both of you but use this advice as a guideline and not a hard-set rule.

Because here’s the thing.

You and your mirror soul might hate each other at first sight.

Sometimes that surprises people when you consider the type of bond you share together. But twin flame connections are high energy and that connection sometimes backfires early on.

High Energy Has Its Own Rulebook 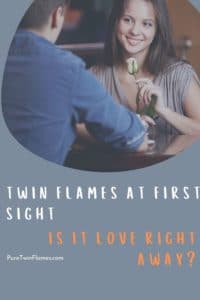 If there’s one thing for sure, that first meeting with you and your twin will stand out. It almost never goes completely unnoticed unless you have some major distraction at the time.

It’s a high-energy connection. It’s two halves of the same soul coming into contact for the first time (in this lifetime).

How that energy chooses to manifest can be anyone’s guess. It can mean intense love, passion and a deep connection right away. Or it can fly in exactly the opposite direction (remember that hate is not the opposite of love).

Don’t judge yourself, your twin or put expectations on how your first meeting should be. There can be many factors at play here from your past life experiences to how the first physical meeting happened to take place.

I hear thousands of stories of people on their journey and in general, I’d say:

Just because you fall in love with them on first sight or you hate their guts – there are other factors involved. So use this as a guideline.

What Happens When Twin Flames Kiss for the First Time?

If you’re trying to figure out what kind of connection you have with someone, the physical sensations of that first contact can help give you a guideline.

I’ve covered the first touch between twin flames and what it’s like to kiss your twin flame in full detail before and (in short) the same rules apply.

It’s going to stand out. With something like this, it’s more likely to be a positive experience (we’re talking life-changing) but, again, not every first meeting is going to mean you kiss right away.

Can Twin Flame Attraction be Lust at First Sight?

Similar to kissing at first sight – there can certainly be more intimate connections early on. I’ve covered twin flames sexual energy in detail but I can safely say if this doesn’t stand out to you then it’s probably not a true twin flame.

Again, just because it can be lust at first sight doesn’t mean they’re not your twin flame just because you’re not sexually attracted to each other right away.

It’s likely you have a physical attraction but I keep stressing this because I don’t want anyone placing unfair expectations on their journey. 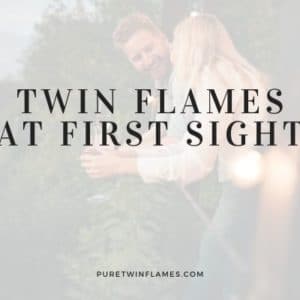 What if Twin Flames Ignore Eachother at First Sight?

Less common, but it does happen.

Sometimes it isn’t until much later in life that it dawns to one (or both) of you that there were intense feelings and a connection there.

The initial encounter might have been brushed off if something else was distracting you when you first met. Again, it’s important you don’t try to judge your journey too heavily but this is a rarer case.

If that first initial meeting didn’t stand out to at least one of you, it’s possible this is a false twin flame. For example, you’ll have strong attractions and feelings for a soulmate connection.