If I had to sum up the twin flame first touch (or first physical contact of any kind) it would have to be intensity. That doesn’t always mean what you think it might and sometimes you’re left unsure about whether that was your twin flame or not. Whether it’s in a romantic setting or you accidentally brushed hands, this physical contact stands out.

The twin flame first touch will stand out. It will be high energy. It doesn’t always result in immediate attraction, love or lead straight to union however, in some cases it can actually have the opposite effect.

If they are aware, it will push them forward on the path and will ignite the flame full-force, with all that it entails (sometimes this means soul shock for the twin flame runner). The first touch is going to activate the sexual energies component and could send you for a loop with its unparalleled intensity, but you’ll get the hang of it after some grounding work.

What Happens When Twin Flames Meet for the First Time?

Remember, on some level, both twin flames already know but this is fairly rare on the physical dimension. The vast majority of people I hear from are at least aware of the journey but often their counterparts are not as spiritually advanced.

That deep sense of knowing that’s rooted in your very soul is going to slowly come online and help you figure out that you’re on the twin flame journey.

The physical attraction between twin flames is going to be unlike any other and might even seem inexplicable to you. This person could have nothing in common with your usual type. In fact, they could even be the exact opposite of your usual type.

Once the conscious awareness kicks in, you’re going to start taking some steps along this path. Though there’s a lot to process along the way and at every turn, at the beginning of the journey there might be a bit more to process than later on.

You’ll get better acquainted with your twin flame’s energy signature and will slowly start to realize just how present they’ve been in your own energy field for pretty much all of your life. It’s going to become easier and easier to pick up on their energy and presence in your dreams, spiritual pursuits, twin flame meditations, and astral traveling.

The physical attraction is going to become stronger and stronger and you’ll start to experience the sexual energy between you two, even without making that kind of 3D contact at that point. The growing sense of energetic intimacy and attraction is likely to become overwhelming every now and then because it’s going to be so much more intense than anything else you’ve ever experienced in similar circumstances, or under any circumstances, by and large.

The triggering will also become stronger as the attraction grows and the soul to soul connection becomes stronger. It’s going to become very important to have a spiritual practice set in place to ground and balance you, as the dark night of the soul is going to start showing its unpleasant though necessary self. 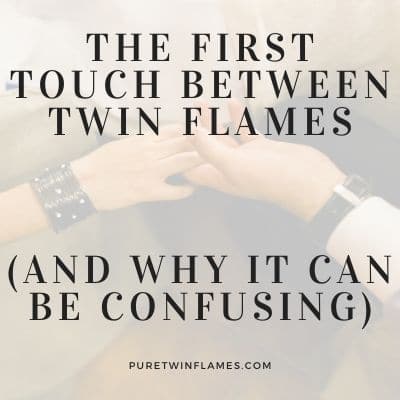 Experiencing the First Touch With Your Twin Flame

Your twin flame first touch is pretty much going to be something unlike anything else you’ve ever imagined or experienced.

It’s most likely going to be confusing, too. Consider the fact that your human experience vessels are connecting in the 3D for the first time, but your souls have been in contact for all of your current human experience and all of the previous ones.

While your energetic bodies are connected for all of your lifetimes, once you make 3D contact all of your energy fields are going to start interacting in a much more intense way. Your chakras will start to harmonize and slowly align with one another, and physical contact is going to trigger that process if it hasn’t already started. If it did start already, then it’s going to become accelerated by the initial physical touch.

From the initial touch moment on, everything about your connection is going to start to accelerate: the spiritual contact, the triggering process, the growth process, the harmonizing process, the sexual energy, all of it. It could be as intense as feeling like you’ve been hit by a freight train that’ keeps accelerating and pushing you along.

That’s why it’s so important to have a set ritual for grounding and balancing your energies, so this process won’t be as confusing and abrupt as it might get if it catches you off-guard.

What Happens When Twin Flames Kiss for the First Time?

I’ve gone into more detail on kissing your twin flame already. For some of us, this might be your first physical contact with your twin as well. (Remember: This isn’t a competition. Whether you kissed on your first meeting or 10 years later, it really doesn’t matter).

If the first touch triggers the ignition and stokes the flames of your bond, experiencing the first kiss is going to be pretty much explosive.

Though it might be less of a favorite topic in the spiritual world, the romantic twin flame bond has a very intense sexual side to it. It’s a very powerful and explosive sexual energy that accompanies even the mere presence of your twin, let alone any form of touching, and kissing is going to intensify that all the more.

In fact, it could be so intense that you might feel almost like having a climax or actually experience one, simply from kissing, no matter how experienced or mature you are. Though sexual energy is the lowest vibe in your energetic body, it’s also part of the creative and procreative processes, which are manifestations of high-frequency unconditional love.

The strong sexual component to the bond also serves to ground the energies of the twins, and it’s especially important for their energies to be well-grounded. They act as pillars of light, transferring high-frequency light codes into our 3D reality. The root chakra which spins most of our sexual energies is also the chakra that deals with our grounding energies. So the intensity of the twin flames bond usually makes them better grounded or able to ground much better than others, thereby fulfilling part of their mission to anchor those light codes into the 3D.

Get Guidance on Your Journey

Trying to decipher the overwhelming feeling of the first touch with your twin flame? I can try and help, just tell me what you’re seeing so far in the journey.

When it comes to your twin flame first touch and twin flame first kiss, things are going to be intense and surprising at the very least, no matter how well you might think you’ve prepared for it.

Even though you’ve experienced these touches and kisses as part of every human experience during which you were blessed to connect with your twin flame, the energetic memory of those events is very hard to access in a consciously aware manner. So every time it happens as part of a new human experience, it feels like the first time all over again.

That initial contact triggers a lot of processes within each twin flame and launches them both and their sou bond on the orbit of achieving the twin flame union. It could bring different skills or abilities online, in some cases, or intensify existing ones. Since it’s a very significant milestone along your life path and fulfilling your mission.

It doesn’t mean you’re about to enter union though. You might be lucky and you’re both already ready but I just want to manage your expectations there.

It’s a profound moment that has numerous and multi-layered implications in your energetic and physical bodies, as well as in your skillset and abilities. It might turn out to be a major turning point in your life.

Everything you know and feel could be cast in a new light, and the way you perceive the world around you and your place in it could be changed in a profound manner. And it all starts with a touch.