Is your twin flame ignoring you? What does it mean? Can a twin flame ghost you considering you always have that telepathic connection?

Ghosting in a twin flame relationship is common but doesn’t mean the same thing as it does in a traditional 3D relationship. If your twin withdraws from you and doesn’t reply to your messages that connection is still there.

It doesn’t mean that they don’t care. It doesn’t mean they’re not your true mirror soul. It’s likely they’re acting out of fear and confusion but there are some things you can do to help them (and yourself).

We’ll dig into understanding why it happens (understanding is important) and then look at what you can do about it.

Is Your Twin Flame Ghosting You?


In a normal 3D relationship ghosting is when one person withdraws from the other, often without warning or communication. It sucks for those involved, but it happens and (in the scheme of things) you both move on. 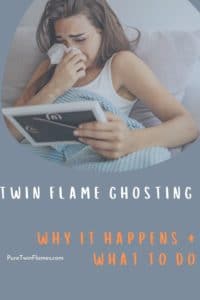 In general, if a friend of mine was ghosted in a 3D relationship I’d say they just dodged a bullet with that one. Who wants to stay in a relationship with someone like that anyway?

In a twin flame relationship, it’s perfectly normal for your journey to experience some hot and cold moments. This can include the runner twin completely ignoring you. I know (first hand) how painful this can be and I’m not trying to detract from that but it is perfectly normal.

Whether a twin flame can technically ghost you… is semantics. In the traditional sense, they’re not completely cutting you off (they can’t) but it can certainly feel that way. Maybe your twin flame just wants to be friends or maybe they’re cutting you out completely.

Understanding why twin flames go silent is always a good step. Before we move on to the nitty-gritty details, I want to head off some important questions just to put your mind at ease.

Can a Twin Flame Loose Feelings for You?

It can certainly feel that way to you for the moment. It might even feel that way to them. The twin flame journey doesn’t just vanish overnight and even in difficult times, you’re always connected. Always bonded. Always two parts of the same soul.

I don’t believe in just sitting back and waiting for the twin flame runner to go through the healing process themselves so there are things you can do be doing – but just know the connection doesn’t immediately vanish just because they’re not answering at the moment.

It’s just a part of your journey for the time being.

Does My Twin Flame Runner Miss Me?

Yes. However, they might not even be aware of it.

On some level twin flames miss each other long before they even physically meet in this lifetime. Part of the deal with this kind of deep connection. You’re both constantly calling out to each other and trying to guide yourselves back to twin flame union.

So if they still have feelings for you and they’re missing you (on some level) why the heck are they ghosting you?

Why is My Twin Flame Ghosting Me? 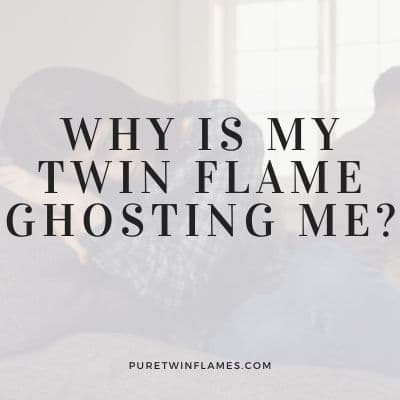 It can be frustrating trying to understand what’s going through their mind and why they don’t see what’s right in front of their face.

However, if you’re reading this, chances are you are the more spiritually evolved twin. You at least understand some of the spiritual awakening you’re both going through. Very often they don’t and these intense emotions can scare them off.

When your twin flame ghosts you, they’re likely dealing with soul shock. Spiritual whiplash brought about by an intense connection they weren’t expecting and simply don’t know how to handle.

It’s not something you’ve done wrong or caused.

If they’re ghosting you it means you’re going through a period of twin flame separation. Whether they know it or not (likely not) there’s still healing to do before you can move on to the next stage of your journey together.

Some common reasons (but very far from an exhaustive list):

Does My Twin Flame Runner Regret This?

Again, on some level, they’ll regret spending time away from you but whether they’re consciously aware of this regret is another story.

A common trend I do see is the runner ghosting and knowing something is wrong but they’re not able to understand what. They’ll often start framing things in a way that makes sense to their worldview and understanding of ‘normal’ relationships.

They’ll often blame something entirely unrelated or even try and blame you. Their rationale isn’t based on logic. It’s simply a coping mechanism.

A true twin soul can’t ignore the twin flame journey forever, but there are no hard-set rules here.

Days, weeks, months or even years. When you remember that the journey can play out over multiple lifetimes all of these timeframes are inconsequential to your higher selves (although it certainly won’t feel that way to you).

If you just sit around and wait for them, it might last this entire lifetime.

I’m not a fan of this. If you’re aware enough of your twin and the journey to be here then I believe you should be actively working on your journey to help yourself (and your twin). If you’re simply waiting for them the ghosting might last until the next lifetime you meet again.

So that brings me to the most important part.

What to Do When Your Twin Flame Ignores You

Note: I really don’t suggest skipping directly to this section. Understanding why your twin is acting the way they are will not only help you navigate this stage but also make it a lot easier to deal with.

I have looked at what to do when your twin flame doesn’t talk but if I had to sum this up in one go it would be to focus on your part of the journey.

You can’t directly control your twin. You can’t logic or reason with the kind of struggles they’re dealing with (yes, the runner struggles to in their own way). What you can do is focus on your own healing and as your twin mirrors this, you’ll trigger progression for them too.

I’m not saying you should start ignoring them too. Just take your focus away from them and focus on you instead. This could mean doing a lot of different things but, if you’re stuck for some examples, you could try:

I’m not saying it’s easy to ignore the pain of them ignoring you. It won’t just instantly go away but try and understand that they’re not trying to hurt you and by focusing on yourself you’re going to trigger them to do the same.

As the other half of your soul, a twin flame connection is always a mirror. What one does is going to be reflected (to some degree) in the other. So focusing on your part of the journey will get them to do the same, but it goes a little deeper.

What is My Twin Flame Mirroring With His Silence?

In a round-about way, your twin flame is ghosting you because they’re likely mirroring your own ghosting of yourself.

If you ignore yourself (any aspect of yourself) your twin soul is just going to do the same thing. It might be you already know where your focus is (if not, a little meditation will go a long way) but ghosting is often a call for you to focus on yourself.

I know it might seem counter-intuitive (especially if you’re newer to the journey) but the answer to your twin ignoring you is always to fill in this gap by focusing on yourself even more.