The twin flame journey is incredibly rare and unique normally (whatever normal is for twin flames), but if one of you is a Heyoka empath, things can get… interesting.

Twin flames are already more attuned to the emotions and energies of those around them, making them natural empaths. This specific type has an interesting way of helping others and can help your journey to union… but it doesn’t always feel like that.

What is a Heyoka Empath Twin Flame?

I don’t like to get too bogged down in terminology, but Heyoka is a Native American term that loosely translates to sacred clown. Historically, it would refer to someone who challenged the status quo through humor and being… a little outside the box.

If this isn’t already starting to sound like a twin flame to you, you might want to take a moment to look at my guide on what twin flames really are.

For empaths and energy workers, a Heyoka is a term for someone who actively disrupts the energy of others. Pushes them off their current path.

Not to hurt them but to guide them.

Often these spiritual jesters don’t know why they do what they do. They often feel like they’re just being light-hearted and joking around, but the universe sends them into a person’s life as a course corrector.

A Heyoka empath can be on the twin flame journey themselves. A potent combination of someone who is not only highly attuned to the energies and emotions of those around them but is actively called to help guide others as well as themselves.

It’s also possible for a false twin flame to be one. Causing a little mischief in your life (or that of your mirror soul) to divert your attention from the wrong place. Prevent the two of you from going off course.

Signs You (or Your Twin Flame) Are a Heyoka Empath

Twin flames are already attuned to the energies of those around them, so it’s not surprising that some of the things that make a Heyoka would also be symptomatic of twin flames. So (as with any external signs), remember this: 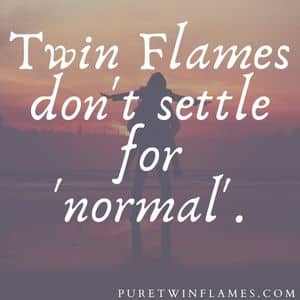 Your twin flame journey is unique. Use these signs are a guideline, not a hard-set rule.

A Heyoka empath colors outside the lines. Not to intentionally cause harm or trouble but because they see the world differently.

Doing things normally can get boring quickly. Sometimes the best way forward is to break a few eggs and see what happens.

Standing Up for Those That Can’t

You (or your twin) will often stand up for those who can’t or won’t stand up for themselves. You’re not looking for a fight, but your inner guidance knows when something is wrong. You’re not trying to cause a problem, but you can’t ignore someone who needs an ally.

This is one of the easier-to-spot signs for an empath, common for those on the twin flame journey, but a Heyoka will probably act… differently. Their methods of defense are often unconventional but effective.

A Natural Born Leader (or Rebel)

Heyoka twin flames often take on a leadership role unwillingly. Even people who are not spiritually attuned will naturally look to a twin flame, but the Heyoka empath leans more towards the rebel side.

You’ll often find yourself in a position of power or influence and not really know how you got there. It just sort of… happened. People around you are drawn to your energy, but you’re not going to take on the standard role.

It won’t matter, though. They’ll give up trying to understand why you’re outside of the box and just follow along for the ride.

You Don’t Take No for an Answer

Empaths (and twin flames) are naturally attuned to the universe’s messages. Whether a conscious decision or not, if they know what they need to do, they‘re going to do it.

Often confronted with people whose default is to say ‘no,’ this can get frustrating. You’ll find yourself butting heads with authority figures or those in positions of power more than most. These moments are little more than speed bumps, however.

If your twin flame is a Heyoka, this is one to watch out for. It might seem like they’re just getting into trouble, but you’ll eventually learn to trust them.

You Push Others Forward

Even people with no interest in the spiritual journey know that an empath’s ultimate drive is to heal and help others. A Heyoka twin flame is no different. Their actions are unorthodox and surprising, but they’re here to help.

You’ll often find yourself drawn to help others (whether they want it or not). The Heyoka in you just means you’ll probably butt heads with them at first. They might resist your help, but they’ll figure out that you’re good for them eventually.

An empath experiences intense emotions from those around them.

A twin flame experiences their own emotions and those of their mirror soul.

Combine these together, and you have the recipe for some intense experiences. From the Heyoka empath twin flames I’ve spoken to over the years, this tends to manifest as some seriously difficult experiences early on.

Like learning to ride an emotional bull. One with extra horns that woke up on the wrong side of the bed.

Your own emotions can get mixed up with others making what you want an enigma. The twin flame journey is a road of self-discovery and for a Heyoka, it can sometimes be a little bumpy while you learn to piece together what you want.

The things that give you this bumpy road also make life exciting. Both for yourself and others around you. There’s never a dull moment when you’re with a Heyoka twin flame (even though sometimes you might wish there was).

The mundane day-to-day is not what we were put here on Earth for. We were meant to live life to the fullest, and that’s what a twin flame relationship is all about. A Heyoka just applies this philosophy a little more liberally than most.

It’s an amplification of an already intense experience.

You Hold Up a Mirror

As a Heyoka twin flame, you do this not only with your mirror soul but with those around you. It’s a powerful tool for self-growth both in yourself and others, but it can also be difficult to handle.

You’ll find yourself in situations where you’re forced to look at your own flaws and those of others. They won’t always thank you for it but, in the long run, it’s going to help them.

Honesty Above All Else

A Heyoka (especially a twin flame) has definitely heard the term honesty is the best policy. Everyone has. The difference is… they take this to heart.

Whether you want to hear it or not, a Heyoka twin flame will give it to you straight. No sugar coating, no beating around the bush. Just pure unadulterated honesty. Most of us are not ready for that.

They’re not trying to cause trouble or hurt anyone, but distractions and lies only slow down our progression to what we truly want. That goes just as much for those around you.

The twin flame journey is unpredictable in itself, but the Heyoka factor is like pouring gas on the flames. Then throwing a few extra cans on there just to be sure.

A Heyoka is curious. They want to explore, to understand, and they’re definitely not afraid to take risks. They won’t settle for being told something just is. They’ll break the mold and sometimes create something new in its place.

Twin flames thrive with co-creation. They bring something new and brilliant into the world together. A Heyoka twin flame just takes this one step further and often creates something nobody saw coming.

Their natural creativity might take the form of art, music or writing, but they certainly won’t be constrained to the arts. Their real creativity often manifests in their plans.

They shoot for the stars. They don’t think to question if they can do something. It’s more about how.

The Struggles of a Heyoka Empath Twin Flame

Don’t get me wrong.

It’s a blessing to come into the world with this kind of spiritual attunement. It’s a gift to yourself and those around you. It’s a gift to everyone on Earth. It’s also a powerful tool to help further your path to union, as the Heyoka ability to mirror and heal will actively help your twin flame.

But the twin flame journey can already be turbulent and hard to cope with. In the early stages, you’re going to have to learn to understand these energies, emotions and learn when to help others and when to focus on yourself.