Going through the dreaded separation phase of your journey is very triggering and traumatic but understanding the twin flame runner soul shock will help you understand what is going on. I’m not a huge fan of the runner/chaser terminology because I think it creates some assumptions. In reality, both of you are going to face some version of soul shock and both of you are going to have to do something about it.

The twin flame runner soul shock can be thought of as a spiritual whiplash. The runner is not ready for this type of connection and doesn’t know how to handle it. This can (and often does) lead to them making decisions they couldn’t explain if they wanted to.

Regardless of the personal preference for terminology though, there’s one fact that cannot be denied: both the twin flame runner and the twin flame chaser experience soul shock once they’re in separation mode. The imposed distance between the twin flames only goes so far, since their soul bond can never be truly broken, but being at enough of a distance in the 3D and in higher dimensions is the cause of a lot of pain.

That sense of feeling bereft, adrift, and isolated is a torment both the runner and the chaser experience, though to that each of them feels some specific symptoms too. These symptoms range from emotional overwhelm, confusion, disorientation, anxiety, pain, loneliness, rejection, frustration and so on. Though it’s an intense phase of the twin flame journey, remember that the separation is one step along the way towards divine union.

If you’re dealing with a difficult separation stage and looking for guidance on your journey, take a moment to get a twin flame reading on your path.

What is Twin Flame Soul Shock?

As with many things on the twin flame journey, definitions can be… fuzzy. There’s always variation and no two twins are going to experience it the same. On top of that, the twin flame community loves to argue over things.

I wouldn’t get too bogged down in the details.

Whether or not you’ve met each other in the 3D, whether you’re in separation after a romantic relationship or you’ve never spoken a word together – soul shock is something most of us face at least once on the path to union.

When Can Soul Shock Happen?

There are no hard-set rules but in general, it seems to happen after an intense exchange of energy, for example, the twin flame first touch tends to stand out to both of you. It might happen before you ever speak a word together or, for the lucky ones who meet later on, it might never happen.

I say this often, but don’t expect exact roadmaps on your journey and don’t compare your progression and experiences to anyone else.

It’s a bit like being in a moving car and someone suddenly hits the brakes. Everyone in the car feels the whiplash of that sudden stop, right? That’s the best analogy for the twin flame soul shock: everyone feels whiplash, whether it’s the runner who hit the brakes or the chaser who didn’t have any say in it.

You might be tempted to believe that since the twin flame runner is the one bowing out of the journey for a while or for good for the duration of that human experience, they’re not experiencing any of that whiplash, but it’s not always that simple. Exactly like the driver hitting the brakes, the runner takes a hit just as much as the other twin flame does. How that whiplash manifests for each of them is different in some points, true, but the soul shock is there for both of them.

Some things about that soul shock are common for both the runner and the chaser. Things like feeling bereft, adrift, isolated, confused, triggered, and hurt go on for both twin flames.

Soul shock for the chaser often leaves them with the sense of being rejected, abandoned, feeling powerless, self-doubt, and perhaps experiencing low-vibrational feelings (like resentment) towards the runner.

If you are currently the chaser in your journey, read that part again. I know what kind of pain being the chaser can feel like but soul shock can really slow down your own progression (and, in turn, your twins). Make sure you understand the twin flame runner’s feelings and why they’re acting this way. 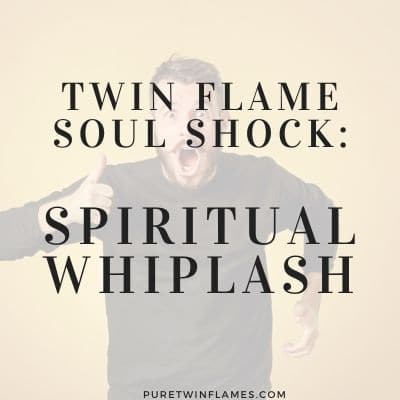 When it comes to the runner, to the core of the twin flame soul shock feeling of whiplash from hitting the brakes on the progress made towards divine union can be added the sense of guilt, not being good enough, and perhaps some low-vibrational feelings (like resentment) towards the chaser.

If you speak to someone who has stopped running they very often can’t really explain what they were doing. This isn’t a logical thought-out response (which is why trying to appeal to their logic and reason doesn’t work). It’s a spiritual knee-jerk response.

Again, the symptoms are never going to be exactly the same for everyone. Use these as a rough guide at best and not a firm rule about what should or shouldn’t happen.

I’ve gone into twin flame separation symptoms in more detail and there’s some overlap certainly (especially as soul shock usually leads directly into a separation phase). There are some pretty specific things to watch out for as well though.

You’ll have probably heard of things like twin flame number patterns (or you might be seeing them yourself) as they’re fairly universal across most twins. The whirlwind of energy after experiencing soul shock can lead to a heightened number of these.

Whether you’re just more attuned to looking for your twin at that stage or it’s a symptom of heightened communication between the two of you I don’t know. It’s a pattern I see in a lot of the journies that get sent in.

There’s a lot of twin flame runner’s pain involved in the soul shock phase of this process.

Though it may seem easy to see the runner’s role as that of the “bad guy” in the story, it’s actually an essential part of the separation process of growth, healing, and growing. Even though their actions are based on their own reasoning and frequency aspects and issues, they feel a lot of pain of their own by playing this role.

There’s a lot of guilt on the twin flame runner’s plate. They have to deal with guilt for causing their own pain, causing the pain of their twin (which they also feel through the energy cord, keep in mind!), being limited or stuck on a path which they feel in their heart of hearts they are meant to make progress on, and, finally, for doing the actual running in the first place.

At some low points of the process, they could also feel some low vibe feelings towards the chaser because they are feeling all of that guilt and all of that pain – both theirs and their twin’s. But that’s the triggered part of this process and ultimately what causes so much growth and development as a result. It’s not pretty, but it has a divine purpose, and it’s important to keep that in mind.

If you’re playing the chaser’s role in this dynamic, it’s easy to see your twin as a bit of a “bad guy”. They’re the ones hitting the brakes on your progress towards elevating this connection to union status, right? Or at least that’s how it seems at first glance. But you’re a wise and old soul who sees and understands things on a much deeper level. But until you reach that stage, you’re going to have to go through the separation process.

The chaser’s role in this dynamic usually involves overwhelming feelings of rejection, feeling abandoned, doubting their own worth and even their twin flame status as a result. They might feel like their twin flame is toxic or that the whole process is deeply unfair.

All of these things can make the chaser’s heart experience some low vibe feelings towards their twin flame too, and they are likely to be very triggered. As a result, they are going to go through a lot of growth and development and ultimately raise their vibration so much so that it helps their counterpart get out of the lower vibes too.

Will the Twin Flame Runner Come Back?


Technically, the runner never actually leaves. While your 3D human experience selves may break up or not even get into a relationship at all (particularly if you’re playing out the romantic or camaraderie blueprints of the twin flames interactions) or be in a no-contact type of situation, your higher selves and your souls are in permanent contact and always connected.

In fact, your twin flame’s higher self is always by your side just as much as yours is by their side, even during the actual separation phase. You’re feeling each other’s feelings, overhearing each other’s thoughts, sharing dream encounters and experiencing higher-dimensional interactions, whether you’re consciously aware of them or not. So while your human experience selves may be apart for a while or for a few lifetimes, human experience lifespans are mere seconds in the grander scheme of things for your divinely linked souls.

Once the separation phase has run its course and both of you have done the growing and developing needed in order to move forward with the connection, you’ll start to feel and see signs of the incoming reunion.

If you haven’t already, I’d suggest checking out my complete guide on twin flame separation because while dealing with this phase is never easy the answer is almost always the same.

Understanding soul shock helps you understand the twin flame runner’s feelings but the answer is always to focus on your own internal healing. It’s the best way to help you and the runner.

When the twin flames journey is put on hold, both the runner’s and the chaser’s souls experience the twin flame soul shock. Each of the twin flames has some common experiences as a result of the separation, and also goes through some role-specific aspects of the process.

It’s important to keep in mind that this is a process towards twin flame union and that it’s not only a necessary step along the way, but one of the greatest triggers of soul healing, shadow work, and karma processing for each twin flame.

So no matter how hard this process is, try to keep your eye on the ball: you’re both making progress towards your twin flame union!