I am absolutely aware this one is going to ruffle some feathers but I get asked about same-sex twin flames on a regular enough basis that I think we need to talk about it. I’ll be honest, I’m a little surprised that this is even a question since, to me, it represents a fundamental misunderstanding of twin flames but here it goes.

I was talking just yesterday about how uncommon twin flames are but relatively speaking (keeping in mind I hear a lot more twin flame stories than most people will), you’ll not find many people really blinking an eye. Certainly, not from anyone that understands the twin flame journey.

Can Twin Flames be Two Females? 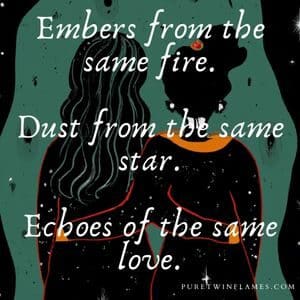 There’s a lot of confusion caused by the terminology we use, ‘masculine’ and ‘feminine’ but long before either of you were in this physical body as two women, neither of you had a gender. In fact, it might be a good idea to try and understand the divine masculine and feminine for twin flames.

Does It Make a Difference?

I’ve certainly heard cases where it can make a difference to the twin flame journey but maybe not where you might think.

On the higher dimensional level, it really doesn’t matter what your physical gender is on the physical plane. When you boil it right down, you’re still the same soul which has split into two parts. So there is absolutely no difference whether you’re in a same-sex relationship or not.

On a twin flame journey, this is certainly the case.

Where it Can Matter

The problems can arise where they often do – at the physical level. We, humans, are wonderful people (for the most part) but sometimes we can complicate things far more than they need to be. Often where I see our physical gender causing an issue is where one (or both) twin(s) have not established themselves as gay, queer, pansexual or whatever label we really want to give it. Again, this kind of connection absolutely transcends our expectations of the physical world.

This high-energy connection can already be turbulent and confusing (especially to the runner twin flame) and we see this time and time again in twin flame separation (no matter the gender).  Sometimes the runner will convince themselves that there can’t be anything there because they’re not attracted to that gender. The truth is however, they’d find some other excuse even if you were of opposite genders. The runner finds a reason to run when you both still have work to do. It doesn’t really have anything to do with gender.

Sometimes external forces and expectations placed on us at a physical level can make an already difficult journey even harder. Whether it’s family, friends, society or even local laws there can be physical strains on a same-sex relationship whether they are twin flames or not. From what I can see these are becoming less and less of an issue in many places but it can still certainly be a factor for many.

Very often when talking about the twin flame journey I find myself adding a disclaimer that not everyone believes the same as I do. Opinions vary pretty widely on a lot of different aspects of the journey and I’m sure there are people out there who don’t believe same-sex twin flames are possible. However, I won’t add that disclaimer here. I’ve seen far too many instances of same-sex twin flames to think for a moment that it isn’t possible or any different at a higher level.

I’ve looked a little at what the Bible says about twin flames (as well as touched on some other religions) and I won’t get into how to reconcile these feelings with religious texts. I don’t often bring religious beliefs into the twin flame journey but I will say if there’s a creator who gives us the capacity to love someone of the same gender then I can’t see them being upset that we followed our hearts to happiness with them.

If you’re a little unsure of how to further your own twin flame journey, take a moment to tell me about your path so far.