One of the more controversial topics is the idea of a twin flame friend-zone and the question can twin flames be friends? Sometimes one (or both) twins might be with false twin flames or not feel ready for a relationship (incredibly common) so can (or should) they just remain friends?

Strictly speaking, no such thing as a twin flame ‘friend-zone’ and the vast, vast majority of twin flames do follow a romantic blueprint. However, in a single lifetime, it is possible that two twin flames remain just friends if that’s what they choose to do. So it’s a little more in-depth than a simple yes or no

I’ve covered the idea of twin flame failure in more depth but the basic rule of thumb is twin flames are always going to reach union in the longterm. The reason we have to actively work towards that goal (and not just sit back and wait for it to happen) is that doesn’t mean it necessarily has to happen in this lifetime.

My usual disclaimer: Opinions vary and that’s perfectly normal. Be wary of anyone who claims to know these things for certain. I base my opinion based on what I see in my own journey and the thousands I hear about.

If you’re trying to further your journey from friendship and toward true union, get a twin flame reading and let me help guide you on your journey.

Let’s dig in a little deeper into the idea of blueprints and what you can do to further your twin flame journey towards a romantic attachment.

Can You Just Be Friends with Your Twin Flame?

There are no hard-set rules here so really, you can do whatever you like but this is based on what I most often see.

You might be tempted to ‘just be friends’ rather than dealing with a long and painful twin flame separation. If, for whatever reason, a romantic attachment isn’t possible at the moment the thought of losing your twin from your life completely can be too painful.

Others go the opposite direction. Having your twin in your life without being romantically involved (or seeing them with someone else) can be too painful so it might be easier to not see them at all.

Again, there are no hard-set rules here and there’s not always an easy answer.

Getting Out of the Twin Flame Friend-Zone 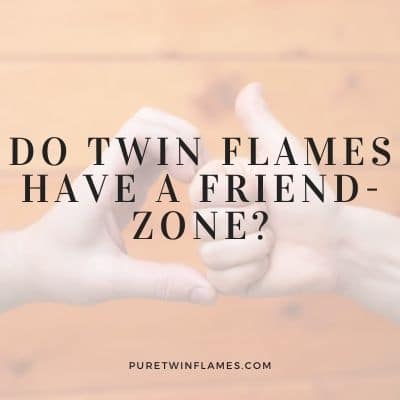 I’m going to use the term “friend-zone” here loosely because it’s a term you’ll commonly hear. I don’t overly like the term myself and don’t think it’s really fair to the journey to refer to being friends with them as being “stuck in a zone”.

If you’re sure that you and your twin flame are acting out a romantic blueprint during this human experience but you’re stuck in the friend-zone, there a few things you can do about it, like working on your frequency and surrendering to the journey.

But the truth is that it takes two to tango, and the twin flame dynamic is no different in that regard. Trust that it’s all for your greater good, which spans over countless lifetimes, not just this current human experience.

That doesn’t mean you should sit back and just hope. That’s one of the worst things you can do and one of the first things I always warn people against. Even if you’re “settling” for just being friends at the moment, you should be working toward furthering your journey.

So start working on yourself. There’s a lot of different things you can be doing to further your journey such as using twin flame meditation (possibly the most important tool we can all use).

Work on Your Frequency

Whichever blueprint you’re dealing with, making progress on your twin flame journey is achieved through getting your frequency higher and higher and working on your ascension.

You can only do your own work though, and not that of your twin too. So simply focus on being a true friend to yourself and focus on your own ascension. Your frequency will also “touch” your twin through your twin flame connection and stimulate them to get their frequency higher.

You can work on getting your frequency higher by embracing the practice of meditation, for instance. It’s a very powerful tool for spiritual growth and getting in contact with your higher self and the higher self of your twin flame. Through it, you can also get the telepathy going sooner or better and have stronger energy exchanges. The back and forth of energy is going to help you make more progress on your journey towards union, regardless of your blueprint.

The higher your frequencies, the closer you’ll get to fulfilling your blueprint. And when that’s a romantic blueprint, then that means getting out of the friend-zone.

Surrender to Your Journey

Though it might be tempting to try to take charge of the situation and somehow move things along faster, you can’t. What you can do is surrender to the twin flame journey as it is and grow through it.

Though it might seem counter-intuitive, the best thing you can do for your connection is actually to allow it to unfold naturally. That’s going to mean getting out of the friend-zone sooner if you’re in a romantic blueprint during this human experience.

If you’re feeling like you are stuck and treading water, then let’s see what we can do to move your journey forward. Tell me about the journey so far and what you’re dealing with.

When I’ve talked about what a twin flame is I’ve gone into the ideas of twin flame blueprints. This is one (of the many) places where opinions vary and there are some who really do seem to be on a twin flame journey together without the romantic aspect.

The vast, vast majority of all twin flame journies I see go beyond friendship. That doesn’t mean they have to. I know some people disagree with this and don’t think twin flames can be friends. I don’t think it’s common but I do think it’s possible.

Whether or not you can do the “just friends” thing depends a lot on the twin flame relationship blueprint you’re working on with your twin flame. While many believe that the romantic type of blueprint is the only one that exists in the twin flames world, it’s actually one of several blueprints. The connection is likely to go through various such blueprints over time until you’ll reach the twin flame union frequency.

In some of these blueprints, it’s much easier or even intended to be friends with your twin flame, while in others it’s not just tough but nearly impossible. But it’s important to come to the realization of what type of blueprint you’re working with an open mind and an open heart. That’s going to help your connection make tremendous progress towards twin flame union, which is, after all, the real purpose of twin flame relationships.

Some of the blueprints you can encounter are the romantic, camaraderie/friendship, familial, and mentoring blueprint.

If you and your twin flame are playing out the romantic twin flame relationship blueprint, then being “just friends” is most likely close to torture for at least one, if not both twin flames.

If you and your twin flame are working on the camaraderie relationship blueprint, then being their friend is not just cool but the whole point of that human experience.

Not that this blueprint doesn’t include a situation in which you’re actually part of the romantic blueprint but “settling” for being their friend because you’re in separation and being nothing at all would imply going into full-on no contact. This must be the true essence of your twin flame relationship blueprint.

Being your twin flame’s friend within a familial twin flame blueprint is also pretty easy to achieve. The heart of all familial bonds – filial, parental, fraternal – is the kind of love that includes the friendship frequency.

Twin flames often end up in deep friendships when they’re playing out the mentoring blueprint, too. It’s one of the most enlightening types of blueprints because it’s based on the friend connection with a healthy side of teaching and sharing knowledge and skills.

If you’ve ever wondered can twin flames be friends, the answer is that they sure can, but should they? And depending on the nature of the twin flame connection blueprint they’re working on during a specific human experience, the answer can be “sure thing” or “maybe not”.

Determining your twin flame relationship blueprint and surrendering to it might be tougher to do, especially if you’ve been operating under the assumption that the only type of twin flame blueprint is the romantic one.

But you can work together as the amazing team you are and figure out whatever blueprint you’re dealing with. And once that’s clear, you’ll make the best choices for yourselves and your twin flame journey.