When it comes to twin flames physical attraction, things are on an entirely different level of intimacy. Feeling that kind of attraction is most likely going to be one of the most intense types of energy you can experience, both in terms of the 3D and the spiritual. This is not the same as a ‘normal’ crush and I can promise you it’ll stand out.

However, it isn’t always that way for both of you in the beginning (we’ll get to that).

What makes twin flames physical attraction different is that powerful sense of familiarity between the divine counterparts. By the time they connect either in spiritual energy or in the 3D, they would have met and experienced vivid dream encounters and might have already met over different lifetimes.

Remember, twin flame sexual energy is not as simple as just liking the shape of the other person’s face or the way they’ve done their hair. This is the other half of your very soul in a physical form.

So the attraction is going to be experienced like nothing you’ve ever felt. What makes that attraction something like never before is first and foremost the fact that it’s based on the soulbond also known as the soul connection between the twin flames.

Because of this connection, each twin flame has an extremely similar frequency to their twin flame, making their energetic bodies feel like they’re one and the same thing – and they nearly are. Add to that: lifetimes of chemistry, in the case of those lifetimes when the twins played out a romantic connection blueprint. We’re talking about lifetimes of intense sexual and emotional intimacy.

The pull then only grows stronger as twin flame awakens to their joint divine purpose, only strengthening the bond further.

Ever wonder what all the hype is about when it comes to twin flame attraction? What makes it such an attraction on overdrive?

A Powerful Sense of Familiarity

When it comes to twin flame attraction, the basis is slightly different. In essence, with your twin flame, you’re not exploring the unknown like you would with someone else. You’re trying to get back into a situation that feels like home because it is home for your soul and that of your twin flame.

So the basis of twin flame attraction is actually familiarity and pre-existing closeness (remember, on some level, both twin flames know already) that lingers from lifetimes and lifetimes ago. The excitement is based on knowing what awaits you and your twin flame there and striving to get a taste of that heavenly feeling.

While having a crush on someone may result in dreaming about them, including having sexual fantasies about them, these dreams are based on the sense of exploring the unknown, just like the attraction in itself. While these dreams can be very hot and memorable, your soul and very essence are aware of the fact that they are fantasies.

When you wake up you may remember them in great detail, but a bit later during the day, you might find that much of that dream is gone from your memory and you’re just left with a general sense of having had a hot dream which you’d like to get the chance to enjoy as a real event.

Twin flame dreams are based on pre-existing familiarity and twin flame history, just like the attraction in itself. A large part of the twin flame journey unfolds before the twin flames make 3D contact during each human experience. They’re part of each other’s twin flame energetic frequency way longer before their 3D vessels meet during any lifetime. That presence often comes through in dream encounters where twin flames communicate in dreams. which can often be a memory of previous experiences rather than a fantasy about a potential new one. 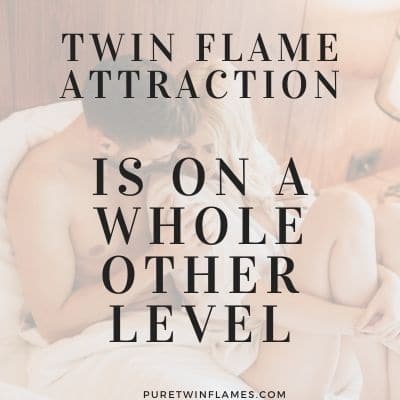 Because it’s based on so much history together or because it’s actually a memory from one or various past lives, the twin flame dream is amazingly vivid. That’s because even if it is a figment of your imagination overall, it includes countless memories from past lives meaning twin flame experiences you’ve had with one another. Your soul knows it was a slice or a collection of slices of your lives together and not just a fantasy; the level of detail and intensity is in accordance with that. It’s vivid because it actually is a part of your many lives as twin flames.

Once you and your twin flame actually make 3D contact, all of that spiritual and previous lifetime’s energy of attraction explodes into a type of connection that you’ve never felt before. Your twin flame will be more attractive and exciting than anyone you’ve ever met before or anyone you’ll ever meet after.

The twin flame chemistry is going to be off the charts, and you’ll just know in the pit of your stomach that the sex between you and your twin flame would be or is going to be on a whole other level than anything else before or after.

Unlike regular situations where you tend to feel less attracted to someone the more explore them because the unknown and excitement of exploration is diminished, the twin flames situation which is based on familiarity increases in intensity and excitement the more familiarity you and your twin flame add to it. More memories of previous lives awaken the more you interact, only adding to the twin flame sensory and emotional bond.

Why Is the Twin Flames Physical Attraction so Strong?

Twin flames are connected throughout their lifetimes by the soulbond and energy cord. Whether they connect in the 3D or not during one particular lifetime, they are forever bonded to one another in a way that cannot be dissolved or discarded, no matter what. It can be ignored based on the free will of one or both of the twins, but it never disappears.

When the twins connect, in an energetic way or directly in the 3D, that bond is energized all the more and it vibrates with awareness. It ignites all the memories of lifetimes past in both of your energies, even if you may or may not be consciously aware of that at the time or later on. This is a deep and intense connection based on a bond that works as an elastic band, pulling you towards one another for lifetimes and growing stronger with every new lifetime during which you make even the least bit of progress towards harmonizing with one another.

So in short, the soul bond acts as a bit of a perpetually regenerating ticking bomb of attracting one another. You’ll feel shocks of that explosion every time you interact in any measure.

Once you have experienced enough interaction throughout your lifetimes, your energies harmonize and your frequencies align. They are highly similar by design, and the more work you do towards getting closer to one another, the more in tune they become.

The more in tune your frequencies are, the more they amplify each other. That means that they amplify everything about the whole journey, including the twin flames intimacy and the feeling of being incredibly attracted to one another.

Lifetimes of Chemistry and Intimacy

The more in tune you are with one another, the more memories of your previous lifetimes together become awakened, either consciously aware or not consciously aware at different points along the way towards union.

The familiarity and bliss of your togetherness grow in intensity and as a result, having sex with your twin flame becomes more and more of a soul-deep need and desire. The satisfaction you can get and offer through that 3D manifestation of your romantic blueprint divine love is the highest of highs, and you can feel that fact buzzing within every inch of your body.

Another layer of intensity is added to how attractive your twin flame is to you and you to your twin flame because the more in tune you get with one another, the more consciously aware you become of your divine purpose and life mission as part of your journey.

That level of connection between twin flames creates a spiritual intimacy unlike anything else in this dimension. The level of pure joy and unconditional love you can give to one another only serves to amp up that 3D manifestation of your togetherness and becoming one.

When it comes to the attraction between twins in a romantic blueprint connection as part of a human experience, there are so many layers of history, interaction, intimacy, frequency, soul, and divine purpose connection that the pull between these souls and between their human vessels becomes one of the most intense and exhilarating experiences.

It’s an intensity that also carries over into blueprints that aren’t romantic as part of different human experiences, but of course, during those experiences, there’s no sexual frequency as part of that connection. But it’s no less intimate or intense, and it only servers to intensify that level of connection lifetime after lifetime until the souls harmonize so much so that they get close enough to achieve union frequency.

By the time the union and merge frequencies are achieved, those souls get the results of lifetimes and lifetimes of hard work, which is why you shouldn’t put so much pressure on yourself during one or another human experience. You were created to achieve this, and it’s only a matter of time – divine timing. So keep going as strong as you’ve been for so many lifetimes, beautiful warrior of the light!