Another topic that you might see a lot of people disagree on is the idea of twin flame celibacy. Should you become celibate if you’re in a period of twin flame separation? What about having a relationship with someone else? Does being celibate speed up the process?

Twin flame celibacy is a very personal decision that can speed up the process if used as a tool to further your spiritual development. Used incorrectly it could backfire and actually slow things down.

There’s no simple yes or no here. I’ve certainly heard a couple of different opinions on this, I’ve heard from people who are celibate while waiting for their twin flame and from those who are not. There’s not a right or wrong answer but if it’s something you’re considering doing, I think you should do it for the right reasons and, sadly, I don’t think that’s the case for the majority of cases I see.

I’ll tell you right now, I’m not going to tell you what to do. I’ll tell you what I think but it’s going to be up to you to decide the right choice for your journey. You might even change your mind in the future (and that’s perfectly fine too). If it’s more specific guidance you’re looking for I do free twin flame readings, however, I still won’t tell you that you should (or shouldn’t) be celibate. 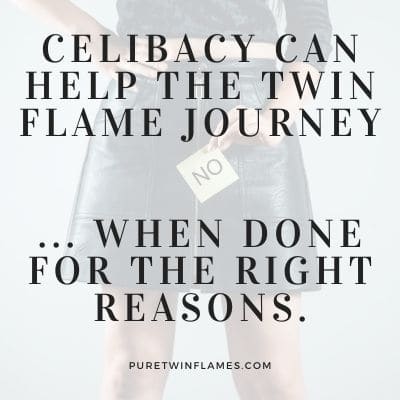 Celibacy, by itself, won’t help you reach union. I’ve heard the arguments that it will but without any actual justification to back this idea up. You might choose to do it, but I think you should choose to do it for the right reasons. If you simply choose to become celibate and then sit back waiting for your twin to come around – you might be waiting a while.

Where twin flame celibacy can be useful is when it allows you to further your own spiritual journey. If it frees up your time and energy to put towards spiritual advancement without an extra distraction in the physical realm. When you know you’ve met your twin and you’ve work to do before you’re both ready for union, you might decide that chasing other relationships is just too exhausting.

If you’ve physically been with your twin flame and entered into a period of separation, it might just be that other ‘normal’ relationships just don’t hold any excitement for you. This is certainly something I hear often enough. This doesn’t mean that what you’re doing is right or wrong, it just means you’d rather not spend your time with it.

If you do choose this path, make sure you’re doing it for the right reasons. Instead, devote this energy towards something like twin flame meditation instead.

In short, celibacy in itself won’t further your twin flame journey but it might free up your time and energy to put towards things that do.

I’ve talked about twin flame sexual energy before. I’m not going to pretend for a moment that a sexual experience with anyone else compares to that kind of physical connection with your twin flame.

That doesn’t mean that celibacy is always the right answer for your journey. There are situations where I genuinely do think it can slow you down if you’re doing it for the wrong reasons.

I’ve talked before about the ‘twin flame trap’ I see people fall into. Sitting back and just waiting for your twin to ‘figure it out’ is one of the worst mistakes you can make. If you’re being celibate because your focus is on them it won’t make a blind bit of difference or help your journey in any way.

On the higher dimensional level, we’re not causing any harm to anyone as long as we’re not misleading anyone with our intentions. Understanding the difference between twin flames vs soulmates is important but I’ve certainly seen situations of twins in separation continued to sleep with their soulmate while still furthering their journey.

Again, this isn’t right or wrong. It’s the why you choose to be celibate (or not) that matters. As long as you’re furthering your journey, at the same time.

When I entered a period of separation after meeting my twin in the 3D, I just knew I wasn’t going to be interested in finding someone else. I’d never heard the term ‘twin flame‘ at that time but I certainly knew something had changed.

For me, becoming celibate wasn’t so much of a conscious decision as just something that happened. I worked on myself. I worked on my journey. I didn’t lose interest in other people, I certainly spent time with friends and made plenty of new ones in that time – but I just wasn’t interested in a romantic or sexual relationship with anyone else.

It just wasn’t on my radar.

I really don’t think it played a huge role in my journey toward union. I think that would have happened either way, just maybe a little slower if it had become too much of a distraction.

Again, I can’t tell you if twin flame celibacy is right for you or not. I can help with some guidance on your journey, just tell me what you’re dealing with so far.

1 thought on “Twin Flame Celibacy (Should You Wait?)”