The twin flame age difference topic is an interesting one because some people seem to think that being twin flames means having no age gap or that it’s necessary to have a significant age gap in order to confirm your twin flame status. Neither of those things is necessarily true.

Most physical characteristics don’t matter on the journey and a twin flames age difference doesn’t change the journey other than (potential) stress from third-party expectations.

Again, many things in the twin flame journey are debated and there are some who don’t agree with me. However, I hear from thousands of people at different stages of the journey and I see absolutely no reason to believe that age plays any real factor in whether or not two people can (or cannot) be twin flames.

Similar to the existence of same-sex twin flames, most physical characteristics do not matter in the higher dimension. Now, that said, sometimes looking at life path numbers and birth dates can give us guidance in twin flame number sequences but having a big age gap or being exactly the same age doesn’t really mean anything.

Does an Age Gap Matter?

It’s very common for there to be an age gap. I won’t share exact numbers (because I keep everything private when doing twin flame readings) but I will say age gaps never surprise me.

The twin flame journey is often played out over multiple lifetimes. It’s already incredibly rare so it’s going to be even more unlikely that you’re both born on the physical dimension close together.

Where it Can Matter 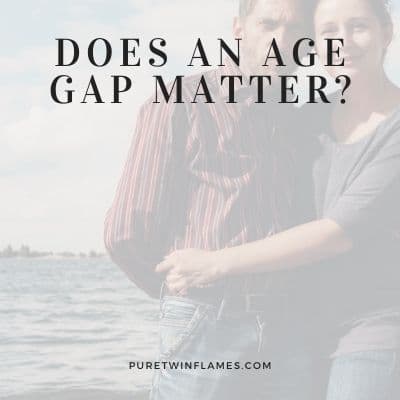 When I say an age difference doesn’t matter, I mean it doesn’t confirm you’re on a true twin flame journey or mean it’s a false twin flame. But it can make an impact on your journey together.

The obvious way it can matter is pressure from external factors. From friends, family and expectations from society. Depending on the extent of the age gap, sometimes a relationship will raise an eyebrow.

Now, chances are you won’t care about this. If you’re dealing with a period of separation and a twin flame runner – they might well be clinging to this excuse as a reason to avoid a connection they don’t (fully) understand or be dealing with someone else talking them ou to the relationship.

The less obvious way it can matter is the older twin flame has had more time to develop karmic baggage on the physical dimension. Therefore, they might have more work to do in order to become ready for union (and that’s not always something we think about).

It can also mean the older twin has had longer to work through karmic baggage if they’re spiritually aware enough so it can actually help your journey.

Both twins are going to get to processing those karmic aspects anyways, sooner or later. It’s just that in some cases it might happen in a more intensive way while in others things go at a slower pace, depending on each twin flame and their level of growth and development.

Do Twin Flames Have Close Birthdays?

Twin flames don’t have to have close birthdays in order to be twins. In fact, they might not even be the same age or of similar ages. Their birthdays might be mirror numbers, but it’s not a requirement, just more of a confirmation.

The more likely aspect that they’ll have in common is the destiny number or life path number since they share the same divine life purpose or mission. In some cases, the twins are of similar ages and in others, there’s a significant age gap between the twin flames. That age gap is not an obstacle in the path of the twin flame connection.

On the contrary, in some cases, it actually helps the twin flames grow as a result of the age differences and the varying levels of growth and development between the twins. When there’s a twin flame age difference, they could process more things related to various relationship blueprints and make a quicker way towards divine union, but it’s not necessarily always the case.

If you’re looking for confirmation that someone is your twin flame through having the same birthday, stop.

You’re spiritual twins, and that doesn’t mean you have to be born on the same day or even in the same month or year. Is it possible that you and your twin flame would have the same birthday, though? Sure, it can happen.

That being said, you might be born on the same date but in different months and/or years, one of you being born on the 22nd of January and the other one on the 22nd November (22, 22).

You could even be born on the 11th or in November (11th month of the year), the both of you. If you’re both born on the 11th of November, in the same or in different years, I’d say that’s very significant for your twin flame journey, by the way, and you should read a bit about the meaning of 911 for twin flames. But again, you don’t have to be born then to achieve your mission and fulfill your life purpose as twin flames.

The mirroring might be present in different aspects of your birthday. You might find that you’re born on the 12th of May and your twin flame was born on the 5th of December, for instance (12-5 and 5-12). Or you could be born at times of the day that are mirrored (1 AM and 10 AM, or 2 AM and 8 PM which in military time is 2000 hours, for instance) or that have a repeating pattern (like at the same number of minutes past, or mirroring numbers of minutes past a full hour).

There could be a slew of very interesting numbers going on for you as twin flames, but you’re going to catch those aspects after your souls have already confirmed to one another that you are, indeed, twin flames. Then you can look into these numerology aspects which are very likely to be significant to your journey.

When it comes to numerology and your birthdays, there could be some very interesting aspects to look at. The date and month of your birthdays could reduce to the same number, for instance, and that number will be important for your path. Or your whole birthday – date, month, and year – reduces to the same destiny or life path number, which is actually more likely than the other things I mentioned above.

Most of those numerology aspects aren’t requirements, just some confirmations of the twin flame journey, among other things. The more likely thing is that your birthdays would reduce to the same destiny path number, though, since your destinies are entwined with your mission, your spiritual connection, and the twin flame journey. But not even that is a mandatory thing.

Are Twin Flames the Same Age?

Another common question and, while it can happen that you and your twin flame would be the same age, it’s not a necessary condition to being twin flames.

While there are many similarities between twin flames and their life experiences or the trials and tribulations they go through, that doesn’t tie into the age factor as much. Some are old souls and are very mature from a very young age while others retain a somewhat childish naivete about them well into their adult years. Age is just a number, after all.

While twin flames don’t have to be the same biologic age, they might be the same age in terms of personal development and growth, for instance. That doesn’t tie into the actual biologic age as much as it is related to experiences, actions, reactions, and consequences that they both went through and those things having left similar effects on each of them.

When it comes to the twin flame connection, there are so many variables and possibilities that sometimes you might even find it difficult to keep track of them. Age differences, if present, will be one of many significant aspects of your journey together. And while any birthday-related aspects might be messages that pertain to your journey, don’t see them as the make or break of your truth as twin flames.