A catalyst twin flame (also known as a catalyst soulmate which is technically more accurate) is often the start of the twin flame journey. It’s a false twin flame with an important role in triggering the spiritual development, healing and starting you down the path towards growth and finding your true twin flame union.

Your catalyst twin flame is actually a false flame (usually a soulmate not a karmic partner) that triggers an awakening and healing. They either trigger or further your twin flame journey by helping you learn an important lesson. They are a driving force for spiritual awakening and progress.

Let’s dig a little deeper. What does a catalyst twin flame, why do they appear and how can you further your twin flame journey?

What Is a Catalyst Twin Flame?


As with much of the twin flame journey, people disagree and argue about terminology and names. At the end of the day, it doesn’t matter what any of us call them, they serve the same purpose.

In my experience, a catalyst twin flame is a version of a false twin flame that makes a real driving difference to your journey towards the real twin flame connection.

The twin flame journey is rarely a short one and sometimes something has to give you a bit of a kick forward. This is the role of a catalyst twin. On the higher dimension, this soul has agreed to help you learn an important life lesson that you need to take the next step.

Think of them as a twin flame version of lighter fluid.

Where to Be Careful

While you might meet many different types of false twin flames, you’ll only have (and need) one catalyst twin. These connections may be short-lived but are almost always a positive connection.

If you’re experiencing toxic behavior it’s likely you’re dealing with a karmic twin. They’re also there to help prepare you for the journey but won’t have the same kind of power to propel you forward. If you’re unsure about the difference I’ve covered how to spot a karmic relationship vs twin flames in more detail.

I’ve seen people go through a short karmic relationship and immediately expect the magnetic pull to their real twin flame to change right away because they thought it was a catalyst.

On the other hand, because the vibrational match can be so close it’s possible to mistake a catalyst twin for your actual twin flame. This connection is only temporary, however. The catalyst will take as long or short as needed depending on what stage of development you are in at the time.

If in doubt? Get a free twin flame reading for some clarity and guidance.

Signs of a Catalyst Twin Flame 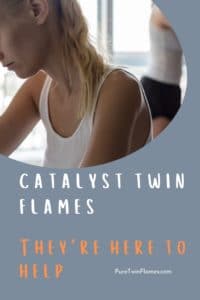 This is one of those times I’d suggest you follow your intuition. At the end of the day, only you and your catalyst will know for certain but there are some (relatively) common signs I see:

Where and When Do You Meet a Catalyst Twin Flame?

A catalyst twin flame is often the start of the twin flame journey but sometimes they can also appear if you’ve been stuck for a while.

There might be some past trauma or karma you need to work through.

Sometimes you might even be far enough along your path that you won’t need one at all. The meeting might not even be a physical one, they can appear in a dream, on social media or perhaps just a voice in your head during meditation. A catalyst twin could even be someone you’ve known since childhood but they didn’t act on their soul mission until now.

They often have some qualities that seem to make them more desirable than other people. Generally manifesting as a soulmate they can make for happy relationships and often lead to amicable breakups when you meet your true twin.

This person is meant to be there for you and help you grow but it’s important not to let them take over your life. Remember, these connections might seem appealing and they’ll be high energy (like any false twin flame) but they’re not the end result. They’re just here to provide a stepping stone to help you move on to the next stage of your twin flame journey.

There isn’t much you can do to speed up a catalyst twin flame. The best you can do is to be aware of the root of the connection and their role in your life, not let them take over or get too close, and remember that they’re just a stepping stone on your way to the true twin flame union.

Stay focused on yourself rather than getting lost in another person’s needs. This is not to say you should treat them badly, but just keep your focus internal. This is an opportunity for transformation physically, spiritually and emotionally.

If you start to feel like this could be your twin flame, it might help to recall any prior relationships and their catalyst function.

If you’re feeling lost on the journey or unsure about the type of connection you’re dealing with, take a moment to describe the connection (in as much detail as you’re able) and I’ll do my best to help.