I see a lot of misconceptions and misunderstandings about this so let’s dig in a little deeper. Whether you’re the runner, the chaser or you’re just trying to understand the twin flame journey. Hopefully, this will help you understand what’s going on.

Note: If you’re experiencing this yourself I do suggest reading my guide on twin flame separation. Understanding the separation stage will give the intense pain and spiritual tear make sense and make it easier to navigate.

Can the Twin Flame Chaser Move On or Give Up?


The (annoying) answer is yes and no.

In the long term, twin flame union is going to happen. They can’t just ‘move on’ from the other part of their soul.

However (and you’ll see me stress this often) that doesn’t mean that union is guaranteed to happen in this lifetime. It’s why we have to actively make it happen.

In this lifetime? It’s absolutely possible for one (or both) twin flames to give up on their journey. I absolutely hate to see this happen because the path to union is already incredibly rare and if you’re in the position to potentially make it happen I think you should make every effort to do so.

But, sometimes, that can mean giving up or moving on (temporarily) on the twin flame runner.

Why Giving Up on the Twin Flame Runner Can (Sometimes) Help

I’m going to say this with caution because I really don’t want you to just sit back and wait for them to do all the work for you.

However, when done for the right reasons, the twin flame chaser moving on can actually help your journey. Sometimes that’s exactly what has to happen. Especially you’re struggling with your own feelings of abandonment, rejection and still have work to do on your own spiritual path to prepare you for union. 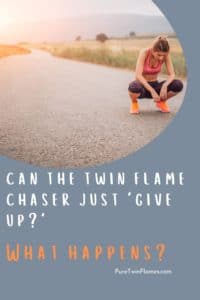 I’m not saying everyone should give up on as soon as they run into a separation phase. This phase plays an important role and most of us encounter it at least once. Whether or not it will further your spiritual journey is going to be very specific to you and your counterpart.

However, I did just do a guide on a catalyst twin flame and (in short) sometimes it takes a soul mate to help you work through some karmic debt and prepare yourself for union. I know (first hand) that this can seem completely counter-intuitive but it might be that when the twin flame chaser moves on and meets a catalyst they can really begin working on themselves and bring an end to the separation phase for good.

Even if there isn’t a catalyst twin flame involved, maybe just taking the time to focus on you is the right move. If our focus is always on the runner and what they are doing that can distract us from the internal journey of self-growth and that is what really brings us closer to union.

I know it’s not an easy situation to be in if you feel like giving up. There’s no easy answer here but I can absolutely say you’re not alone and just because you’re dealing with doubt and frustration doesn’t mean your journey has failed.

It might be that the moment you decide to move on is when your journey takes that next step.

Does the Twin Flame Runner Notice a Change?

Again, this answer is another annoying one. It can help to try and understand the twin flame runner perspective and the spiritual awakening that they’re most likely still waiting for.

The runner twin flame often gets a raw deal. We tend to (mistakenly) make the assumption that they just don’t care or understand what’s going on but they’re often the less spiritually aware of the two of you.

If the chaser moves on the runner is often aware on some level. How they react to this can manifest in many different ways and really depends on how aware they are of the journey you’re on.

Some reactions I’ve seen in the (many) stories I receive:

Remember their reaction will not be one of logic. If they don’t react it isn’t because they don’t care or they’re trying to hurt you. They’re just not aware enough to notice or (if they do notice) they probably don’t understand the energy of the connection yet.

Subconsciously, even the twin flame runner is seeking answers. What makes it harder for them is they don’t even know what the question is.

How Does the Chaser Feel?

If the chaser truly moves on they’re still not going to feel completely apathetic about their twin. That connection is still there even if we’re taking our focus away from it.

The chaser is going to feel the weight of the decision (whether they intentionally made it or not) and that might mean a period of volatile emotions. They might feel isolated and the hurt of the separation might increase in the short term.

If they’ve really moved on, however, this will get easier but it usually won’t happen overnight.

Will the Twin Flame Runner Come Back? Can the Chaser Change Their Mind? 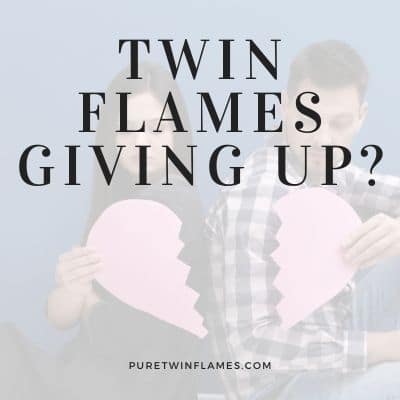 Whether or not the chaser made a conscious decision to move on or it just happened organically by itself both twins will notice that shift on some level.

There’s no hard-set time frame so it might take days, months, years or even lifetimes but this shift of energy is going to make a change. The runner might come back, the chaser might change their mind or the whole situation might change.

Should You Move On and Give Up Hope?

Honestly? I can’t answer that here. Nobody can. There’s technically no right or wrong answer but assuming your goal is to further your path and end separation with the runner twin then this decision is very specific to your twin flame journey.

I will say (for certain) that pretending to move on is never the right idea. Getting involved with a false twin for the wrong reasons is only going to add to the hurt and confusion both twins feel and prolong the separation phase. Moving on is only the right choice if you really intend to move on.

The twin flame runner chaser dynamic is complicated at the best of times, constantly in flux and (ultimately) both of you are making decisions on both the 3D and higher levels.

You’re certainly not completely ending your twin flame journey if you’re moving on for the right reasons. If you’re just trying to hurt them or get their attention then you’re probably just adding a delay to your journey.

If you tell me what you’re dealing with I can help provide a twin flame reading (and some guidance). If not, the best advice I can give is to follow your own intuition on this.

Perhaps the end result will be that your journey takes an unexpected turn – as long as you’re willing to explore this possibility then there isn’t anything wrong with moving on if it feels right.