A twin flames connection is unlike any other and when it’s a romantic connection (which is most often the case) they can absolutely marry. This level of connection goes completely beyond marriage so marriage is common, but not required.

If you’re looking for guidance on your journey, take a moment to get a twin flame reading.

While marriage may be involved in the journey towards union, it’s in no way a necessary step or even a goal in itself, in terms of the soul contract. While the twins are together forever in the sense that they are connected to one another forever through the soul bond or soul contract and the energy cord that links their souls in indestructible, that doesn’t mean meeting each other in every human experience.

Even if they do meet in every human experience, it doesn’t mean they spend all of their 3D time together once they’ve made contact or that they’ll be in a romance type of connection that would lead to marriage.

Do Twin Flames Marry Each Other? 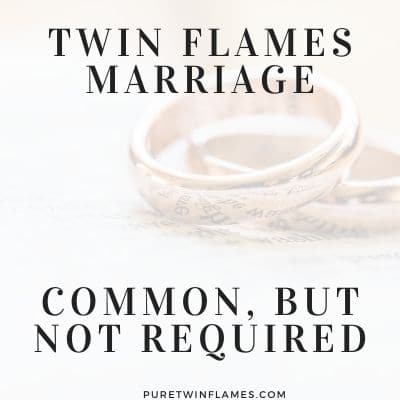 If they do get married, they don’t necessarily remain that way until the very end of their lives, either. The twins will play out numerous types of scenarios in their interaction, based on various types of relationship blueprints. In some cases, they don’t even interact in the 3D and yet they still can fulfill their divine purpose for that human experience.

While a twin flame connection is on its way towards union and is making good progress on that path, it might involve your twin flame being your life partner in some capacity, but it doesn’t have to be a romantic one. It can also be a filial, parental, camaraderie-based type of connection, just as much based on the twin flame high-frequency love as a romantic type of bond.

In some cases, twin flame bonds can mean that the twins get married, but that’s only a portion of the types of twin flame bond relationship blueprints.

Are Twin Flames Meant to be Together Forever?

The twin flame soul contract doesn’t just involve the twins being meant to be together, but it insures it. However, their being together forever has nothing to do with a romantic idea of being married and living happily ever after as part of the human experience.

This is the real type of forever, where the souls are tied to one another and will stay that way until they reach union and then merge. The twin flame energy cord binds the twins’ souls to one another in an indestructible way. That’s why, when both twins are alive during each other’s human experience, they are drawn to one another in ways that might not even make sense to the outside observer.

But keep in mind that being so intimately connected to one another in energy and spirit doesn’t mean the twin flame couple will have a romance type of bond in the 3D. They might play out entirely different relationship blueprints during various human experiences together – they surely will, in fact. That’s how they process all of the karma they have to process in order to heal their soul bond and finally ascend into a divine union.

Do Twin Flames Need to Marry?

Not at all. In fact, twins don’t even have to have a romance-based type of interaction or connection. There are various relationship blueprints that a twin flame bond is going to play out as part of various human experiences.

While it’s true that some of those scenarios based on the romance type of connection can and most likely will include marriage somewhere along the way, it doesn’t mean it’s going to be a happy married life or that they’ll even stay married until the end of that human experience.

While the universe and the divine want each twin flame to be happy and fulfilled, as they want us all to be, the 3D version of happiness is not part of the twin flame’s life purpose in itself. It can be a so-called byproduct of fulfilling their divine mission of anchoring 5D high-frequency love into the 3D world, but marital bliss has nothing to do with that purpose. It can be part of it, but it’s not the goal.

Though it may be frustrating to contemplate, especially if you’re experiencing an attachment to the idea of romance-based interaction with your twin flame, in order for you to fulfill your divine mission as twins you don’t even need to be an active part of one another’s 3D life.

Don’t fall into the trap of equating twin flame union to 3D human experience marital bliss, because while they can intersect here and there in some human experiences, they are entirely different things.