Twin flames symptoms around each other can be tough to spot sometimes. Even though the connection is intense and it generates intense reactions as a result, it can be hard to understand what’s going on. Particularly if you’re newly awakened to the nature of your soul bond or are new to this stage of the twin flame journey during this human experience.

When you’re around each other, you’re very likely to actually feel them by your side. You may or may not be able to actually see them at one point or another, but you will feel their presence. Even more, you’ll feel their feelings/moods much more intensely than over distance. You’ll feel that magnetic pull towards them very intensely. And you’re also very likely to feel aroused by their mere presence. It’s a natural part of the twin flame journey. When you’re going through the separation phase, you’re likely to experience feeling blue, dreams of your twin flame, synchronicities, and telepathy. When the reunion is impending, your telepathic link will intensify. You’ll be dreaming about your twin flame all the time. You are likely to make some mistakes or have the same issues, most often at the same time because you’re more and more in sync. You’ll see more and more twin flame numbers. The attraction between you will become explosive and you’ll have an instinctive knowing of each other’s inner universe. Finally, you will feel at home in each other’s presence.

Spot Twin Flame Symptoms Around Each Other

When you are in each other’s presence, you’ll just know it. Your twin flame will also feel it, no matter at what point they are towards their ascension.

You’ll experience an intense awareness of your twin flame. In some cases, it can cause reactions like anxiousness or alarm because of the intensity of the feeling. Some twin flames become nervous, if they’re very shy, for instance. Others become inquisitive, looking around and trying to pinpoint the source of their altered state.

There is a slew of physical twin flame signs you can experience, going from heart palpitations, dizziness, temperature spikes, unexplained pain or pressure in some areas of your body, to sudden fatigue or even exhaustion.

When you’ve met your twin you’re physically closer, whether you’ve made in person 3D contact or not at this point, you’ll have a much more intense awareness of their presence. Twin flames feel each other’s pain and emotions.

You may experience sudden changes of mood, without having any cause or reason for it yourself. You might find yourself feeling one way or the other about things that you don’t normally pay any attention to.

In some cases, the emotional state can become too intense and could turn intimidating or slightly alarming, particularly more towards the beginning of the twin flames journey during this human experience.

A twin flame relationship is one of the most intense types of connection you can experience. It’s a journey of self-love and self-discovery, as well as a soul bond to your twin flame based on unconditional love.

Twins are connected through the soul bond, which pulls them towards one another like a magnet. When you’ll have met your twin flame, you’ll know for sure it’s them also through this incredibly intense attraction. In fact, you’re likely to feel the twin flame arousal, a type of arousal at a level you have never experienced before.

Guidelines and Not Rules

Before we get further into this I need to make sure we’re very clear on this.

Not every twin flame journey is going to be the same. Signs and symptoms of a twin flame journey should be used as guidelines and not hard set rules. Use them as a piece of the puzzle and not the be-all and end-all some think it is.

If you are seeing these symptoms it’s a good start but it doesn’t automatically mean this is a true twin flame. Conversely just because you’re not seeing them (or not consciously noticing them) it doesn’t mean it’s a false twin flame either. 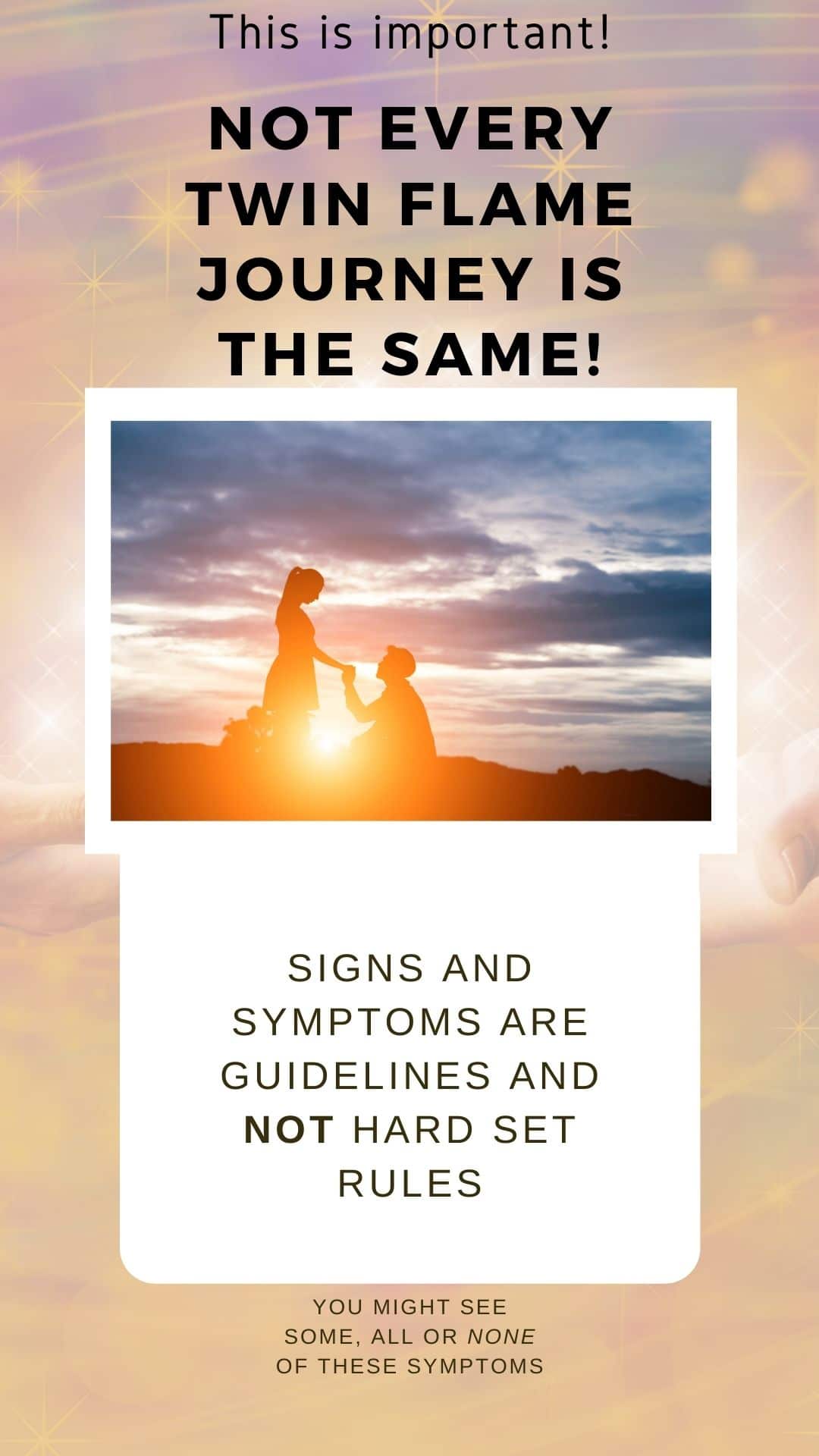 As a result, you are both very likely to experience some of the common twin flame signs below, whether you are in twin flame separation or on the way towards twin flame reunion.

When you and your twin flame are in separation, whether you’ve had a twin flame relationship in the 3D or not, one of the most common twin flame signs of separation is feeling blue.

Twin flames are in constant energetic contact. But being in separation makes the twin flames feel like something or someone is missing from their life. Both twin flames are going to feel this sadness at various points along the way, runner and chaser alike.

Dreaming of Your Twin Flame

It’s very common for twin flames to dream about each other.

These dreams may enact twin flame relationship blueprints, either the ones you’re going to take on during this human experience, or previous ones. Twin flame signs of such relationship processing may be a sudden change in views or feelings related to commitment, the future, or one’s sense of purpose and authentic self.

Synchronicities are some of the most common twin flame signs.

When they are in separation, twin flames are very likely to see a lot of angel numbers that speak to their status along the journey towards union/reunion. The closer they are to one another, the more such signs they’ll see.

It’s a way for the universe to ping one twin or both about their progress and their path.

When twin flames are around each other, the telepathy picks up intensely. More so in separation, in some cases, since in the 3D, they might be in a no-contact situation.

The constant stream of shared information, through energy and telepathy, helps to bring together the twin flames and harmonize their frequencies in preparation for the next stage of the journey.

At this point, the twin flames are getting more and more in sync. The telepathy between them grows stronger, and it spurs on the harmonizing of their frequencies.

If they are around one another and getting closer to reunion, the telepathy is very likely to be off the charts.

Whether they used to share the same interest or not before, being around one another and getting closer to reunion is going to orient the twin flame couple towards the same interests, pursuits, hobbies even.

At this stage of the journey, the dreams will be shared more often than not. It’s likely to experience lucid dreaming together quite often, too.

The more time you spend around one another, the more intense this bond is going to become. As portals to higher dimensions, your dream world might in fact become more comfortable to you than the 3D realities of your human experience.

If there are some lower frequencies still left to process, they are likely to be distributed between the twin flames rather than manifest only as part of one twin’s human experience. Don’t be surprised that the same things seem to happen to both you and your twin flame at roughly the same time. It’s one of the final rounds of lower frequency purges.

A lot of numerology elements will jump out at this point. It could become an almost inescapable series of angel numbers and synchronicities. People around you might even start to notice, it’s likely to get that obvious.

At this point, the attraction is going to be off the charts. You’ve been in each other’s energy field for quite some time now and the need for the 3D manifestation of that level of intimacy is going to become stronger and stronger.

The sense of achieving togetherness is going to become all the more pressing the closer you get to the actual reunion phase.

Feeling at Home When Together

Whether it’s in the 3D or not, being in the energy and presence of your twin flame is going to feel like the sweetest version of coming home. The warmth and joy of your togetherness is going to light you up from the inside out at every level.

Twin flames symptoms around each other intensify the closer the connection gets, whether in separation or on the way towards union/reunion. The synchronized energies and frequencies of the twins make the twin flame bond to become stronger and manifest more and more in the 3D.

If you’re experiencing some of these signs or none at all though, don’t take that to mean that you’re not on the right path towards union. Though many twins experience similar events and stages of the journey, it’s not at all a fixed sort of path. It’s more of a meandering path towards your ultimate fulfillment – union.

As you get closer to achieving that goal, the collective does its best to offer you support. Reach out during the tough times and the joyful ones – we’re blessed and delighted to be your side, every step along the way!