The terminology we use on the twin flame journey sometimes muddies the water. In essence, twin flames are two parts of the same soul and, yes, that does mean that sometimes you see physical and personality similarities but we shouldn’t confuse this with biological twins or siblings.

Before getting into any of this I want to stress something very important.

Use advice like this as a guideline at best if you’re trying to tell if someone is your mirror soul. Often similarities like this are spotted by others more than two twin flames themselves and there are no hard-set rules or requirements on how twin flames should look.

Can Twin Flames Look Like a Brother and Sister?

Because this can be common, I’ve actually covered twin flame physical similarities in more detail.

Almost always there is some form of physical similarity between the two of you but it is more similar to a biological brother and sister rather than an identical twin. It’s not that the two of you will look exactly alike because their energy is mirroring each other – not their genetics.

The physical attraction between you goes way beyond the fact you simply look alike. Thw twin flame relationship is an intense feeling brought on by meeting the other half of your soul. The physical appearance is less important in a twin flame connection.

You absolutely could get twin flames who look exactly alike (or like brother and sister) but that’s certainly not the norm. Usually it’s more minor quirks which tend to overlap.

Oh, and just to be clear the same would extend to looking like a sister and sister (for example). Same sex twin flames would have the exact same connection.

Can Twin Flames Act Like a Brother and Sister? 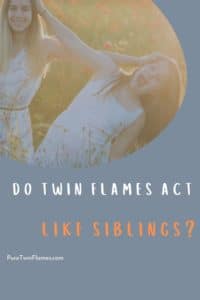 I seem to say that a lot but honestly that’s all part of a spiritual journey where most things are not simply black and white.

There is always a mutual connection that goes far beyond outward appearances of similarities in looks or personality traits. Twin flames have a connection which shares and mirrors their own thoughts, emotions and interests.

This doesn’t mean you’re going to be entirely the same people. You both have different life experience (over multiple lives) but as your vibrational frequency becomes closer together you’ll notice that you and your twin flame become more and more alike.

Can Your Twin Flame Be Like a Sister or Brother?

A lot of people refer to their twin as more than just a romantic connection.

In the sense of a feeling of home or familiarity, a twin flame can be just like a brother or sister. They’ll be like a best friend, a teacher, a partner in crime and a sibling.

Sometimes the energy of the connection shifts over time but that bond is always there no matter what kind of label we want to put on it.

I’ve looked at twin flames just being friends and while most successful journies will make it to a romantic and healthy relationship with the kind of sexual attraction only twin flames have – some don’t go beyond a big brother or mentor stage in a single lifetime.

Even as a romantic relationship, that feeling of home could be compared to being siblings because you’re that close. As someone who is with their twin and has siblings, I can see the comparison but it’s a different feeling of closeness.

Can Twin Flames Be Brother and Sister? 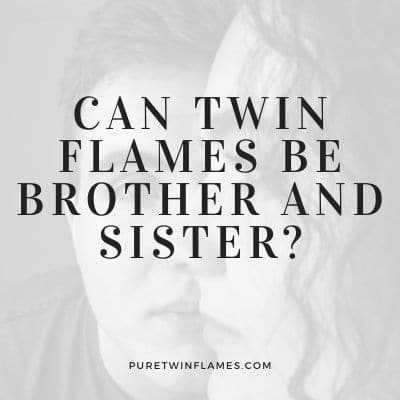 You’ll hear me (often) say there are no hard set rules on the twin flame journey… but I really want to say no here.

Twin flames share a soul contract which being biological siblings would really go against. While not every lifetime is going to lead to a union I don’t think twin flames are ever going to incarnate as actual brother and sister.

The bond between brothers and sisters is powerful (and I certainly wouldn’t want to take away from that) but I don’t believe it’s close to the connection mirror souls share.