What is a twin flame Tower Moment? What does The Tower tarot mean for twin flames?

Tower moments are (aptly) named after The Tower major arcana tarot card. For twin flames, it’s a period of great spiritual development and a great sign for your twin flame journey.

The Tower tarot card is a symbol of great change. It’s an often misunderstood card (and the twin flame journey is already misunderstood enough) so I think it might help if we break things down a bit.

What is it trying to tell you and what does it mean for your journey to twin flame union?

What Is a Tower Moment?

A tower moment is change. Usually a big change. Either an external force acting on your life or an internal pressure bringing about a spiritual shift.

A tower moment is often uncomfortable but it serves a purpose on our path, especially for twin flames. 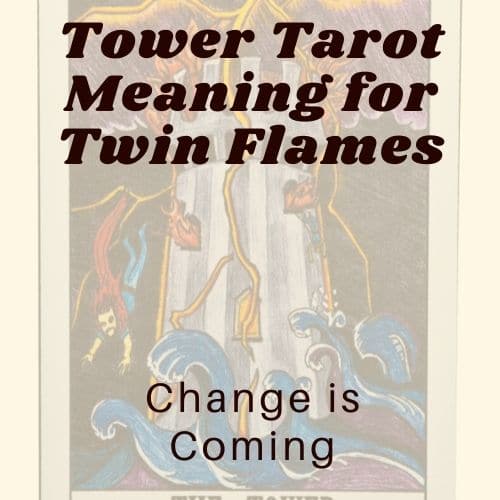 If you haven’t, I would suggest taking a look at my twin flame tarot guide. It might be one of the strongest tools we have to guide us on the twin flame connection and it’s important we use them properly.

I wouldn’t (for example) draw just one card to get any kind of guidance. The cards work best when you look at the combination, so if you’ve drawn the Tower – look at it in the context of the cards around it.

The tower itself is a major arcana and heralds a change. Usually a big change. The imagery of the card is aggressive and is often taken to mean that the change is bad.

Usually, it is disruptive. Often it is painful in the short term. Normally the event that follows marks a major change in your life. In some ways, it won’t be the same again. That doesn’t make it bad.

This short-term disruption is required to make way for what is to come on your spiritual journey.

It often happens during twin flame separation but it can certainly happen at any stage. A common tower moment example is during the illumination stage where you’re both ready for union but still physically apart. A tower moment for twin flames can cause a large shift to put you together even when you’re on opposite sides of the planet.

Whether it’s a physical or spiritual shift, something is going to be there to bring you together. Sooner rather than later. The Tower isn’t a card known to be talking about events that far in the future.

The Tower moment for twins can often come when we least expect it, but it’s there to shake us up and remind us who we are. To remind us that twin flames are not a ‘normal’ 3D soul.

It’s there to help us further the journey.

This can come from many different sources: death, divorce, job loss-anything that forces individuals to take stock of their lives and make changes accordingly.

Too often when I’m doing a twin flame reading for someone they recoil from The Tower card but I think it represents an opportunity of union, not a warning omen of bad things to come.

The best way I can describe The Tower for twin flames is the old saying. You have to break a few eggs to make an omelet.

An easy example might be a false twin flame causing something in your journey or expectations from society. Using the examples from before it could be something not directly related to your twin flame journey like death or losing a job.

These are external changes on the physical dimension which cause you to take stock. Often it can be painful, but you know on some level it’s for the best.

Often, if the card is reversed, it suggests a ‘minor tower moment’ which is more of an internal or spiritual change.

This can sometimes be easier depending on the state of your journey so far. It might be as simple as burning through a block or a self-defeating pattern that has held you back until now.

It might be that both of you have spiritually progressed enough to enter the surrender stage and focus on your own internal journey (which is an excellent sign for your path to union).

What Should You Do Now?

If you’re a twin flame seeing The Tower in a spread don’t panic. Pay attention to other cards in the reading and syncs to guide you. They might show you exactly where this change is coming from.

Almost always this card is good news for your twin flame journey. The road to union requires change. You can’t get there by being the same person you were in separation.

There’s a reason you’re separated from your twin flame and tower moments give us an opportunity to take a step in the right direction. It could even be that you’re ready for union and this is the last shift needed.

It might even be that the tower moment is for your twin flame and your own life isn’t going to see major change – but you should be open to supporting them through it.