Have you ever wondered just how many twin flames are out there?

The truth is that nobody can tell you for sure. The twin flame journey is a deeply personal soul journey, and your own intense soul connection gets confusing enough, let alone keeping count of anyone else’s.

We’re going with some tough love today. I’ve talked about the idea of everyone having a twin flame before and I’m not going to sugar coat it. Most people don’t but this shouldn’t be your focus. 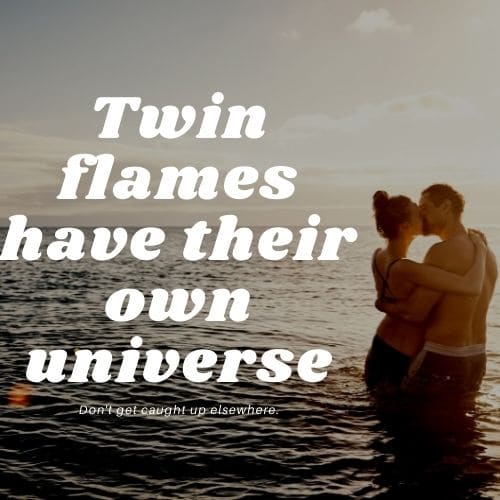 The 144,000 number has been bandied around, that’s true. Some people believe that there are only 144,000 twin souls that have embarked on this spiritual journey that will result in a true flame sacred union.

Despite that fact, I can guarantee that if we add up all the people in twin flame community groups, forums, chats, and whatnot, there are plenty more who are convinced that they are a true flame.

The twin flame phenomenon is a massive one, and there are lots of people who become convinced they are in a twin flame lovers type of situation when they’re not.

More and more of them will show up the more popular and widely known the twin flame idea will become. “Twin flame relationship” has become something of a buzzword people use for multiple types of relationships that are intense at some point in time.

Some of them have absolutely nothing to do with any form of an awakening of consciousness, Kundalini Awakening, or even the faintest form of ignition spark for an awakening process or spiritual path. Some of those connections are in fact abusive at least on one level, which a twin flame connection would never ever become.

Then you have the twin flame journey byproducts, the karmic connections. If you’re convinced you’re a twin, the “karmic” then becomes anyone else your coveted lover decides on or leaves you for. If any intense passion becomes a divine connection on the romance alley, then anyone interfering with it is a “karmic” and therefore a bearer of negative energy.

The actual question we should be asking ourselves is why such big numbers think they’re twins. Out of billions of humans, we might end up with overwhelming numbers of presumed twin bonds, when in fact very few of them are the real deal. What makes people feel that way when there’s nothing of a divine nature or a process of fulfilling a divine mission involved in the romantic connections they deem soul bonds?

If you’re sure you are a twin flame as soon as you heard about the concept and never even questioned if twin flames actually exist, I’d probably question your process of arriving at that conclusion. Being a twin involves a huge lot of personal development and spiritual growth, which in turn tends to involve a lot of questioning things and pondering. That doesn’t mean that you can’t have instant recognition with your twin, though.

But you can also have an intense physical attraction with a soul mate. You can have an intense sexual attraction with a random person without having any soul contract or soul bond involved at all. You can have a strong bond with many people during your entire life. You will have a feeling of recognition with people with who you have no soul contract, but with whom you’ve interacted in previous lives, and with a soul mate too.

Are you sure you’re not confusing a romantic soul mate relationship with your mirrored soul, for instance?

Not every intense sexual relationship is a karmic relationship just because sex is a root chakra type of thing that can get addictive, and not every relationship that hits you on a deeper level makes you twin flame lovers, which is confusing enough. And then you have the false twin flame tangent, a world all of its own.

All of this is to say that the flame dynamic is such a subtle and personal spiritual journey, and it involves so many nuances and twin flame stages that I find it hard to believe there’s any way to keep count of how many there are and what’s going on with every one of their twin flame reunion processes.

Because you’d have to not only know how many there were initially but how many reached what stage of the journey, right? Do you take out of that number the ones who achieved divine union? Do you count them as one and not two within that total, if they’ve merged?

How Many Twin Flames Do I Have?

That’s tough for anyone to tell you, too. Your twin flame journey during any one human experience can include connecting in the 3D with your flame if you go through enough personal growth and make progress with your spiritual awakening. But it might not.

And there are more types of twin flame relationships and twin flame dynamics than we can comprehend from a human vessel point of view. In fact, you might be able to connect with more than one twin flame, depending on your and their frequencies during a particular human experience.

So you’re lucky and blessed if you manifest 3D progress with such a spiritual connection during your lifetime. If you achieve twin flame union, you’re even more blessed. The twin flame connection is still there, whether you’ve manifested contact or not during a particular human experience. The fact that you don’t meet your twin flame doesn’t mean you don’t have one, which in turn doesn’t mean you’re not one yourself.

If you do manifest one, it doesn’t necessarily lead to a romantic relationship or one that results in a happily ever after. You or your mirror soul might want to be or remain friends during a particular human experience in order to make more progress towards your twin flame union sometime in the future. That doesn’t make you any less of a flame bond.

How Many Twin Flames Are In Union?

That’s another interesting question to which you’re likely to get different answers because it depends on what you understand by twin flame union in the first place.

Others define the ultimate stage of this intense connection as merging and see the twin flame union as the stages of human experiences in which the twins are in a harmonious romantic relationship.

But if we focus on how many, who with whom and how I fear we might miss the actual point of this sacred soul connection. Is there such a thing as absolute truths or some barometer of truth when it comes to this incredible bond?

The heart of the matter when it comes to flames is the process of achieving that level of high frequency that literally causes miracles and changes the world. The twin flame phenomenon is about so, so much more than numbers.