A fear of commitment is a common part of the twin flame journey. It doesn’t matter if they’re distracted by a false twin flame or simply telling you they’re not ready to commit. If we scratch below the surface just a little, the real meaning is evident.

On the twin flame journey, a lack of commitment is simply them knowing you’re not yet ready to reach union.

This advice might sound counter-intuitive if you’re new to the journey and it’ll sound familiar if you’ve been on this path for a while. It is worth making sure you understand in either case.

Why Won’t My Twin Flame Commit?


A complaint I hear far too often but it represents a problem in our view of the entire twin flame journey. But, and I can’t stress this enough, the twin flame relationship is not about commitment.

Twin flames will commit in the way that you’re thinking however they are far more than just a romantic partner and certainly more than a karmic partner. Once they’ve ascended they’re practically superhuman. Not in a physical sense but in a spiritual sense. 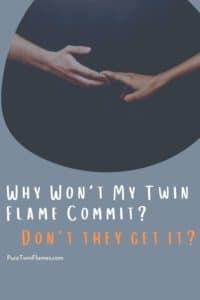 We can’t think of it as a normal romantic relationship. We can’t place the same expectations on it.

Compare it to a family member (it’s the closest comparison I can think of). Do you look for commitment from your parent or a sibling? No, probably not. The relationship is natural. There’s no need for commitment.

If you really want your twin flame connection to go anywhere, you’re going to need to treat it differently from a normal romantic connection. You need to understand that we can’t frame it the same way.

Do Twin Flames Have Commitment Issues?

It can often seem like your twin flame has commitment issues because twin flame separation is simply part of the journey. While it’s a confusing time (for both of you) a fear of commitment can actually be a blessing.

As much as a difficult phase can be painful in the short term, if your twin flame is having an issue with commitment it’s likely (on some level) they know you’re not yet ready for union together.

Simply because neither of you is ready.

I’ve talked about twin flame mirroring before and this is something I see people quick to deny but hear me out. Your twin flame could be mirroring your own fear of commitment right back at you.

Even if you don’t know you have a fear of commitment.

It can be easy for our ego to dismiss this but it’s even easier to choose previous partners who are emotionally unavailable without knowing it. If you’re carrying past wounds from previous partners your twin might well be mirroring these wounds back at you.

Especially if they’re physically involved with a false twin flame, it can feel safe for you. They can’t trigger your fear because they’re not asking for your commitment. In some ways, their higher self knows you better than you know yourself.

How to Deal With Your Twin Flame Not Wanting to Commit

As with most things on the twin flame journey, the answer is almost always to face inward.

If your twin flame runner appears to have commitment issues it’s likely at least one of you still has work to do. Often this means fear of abandonment or fear of rejection which needs to be worked through.

Don’t focus on what you think they should be doing or where your relationship should be at this stage.

Things like this are simply a distraction. Focusing on them will only slow you down from helping both your twin (and you) work on the areas that actually matter.