A difficult separation phase can be gut-wrenching. Soul destroying. Utterly and completely devastating and (despite the common misconceptions or outward appearances) it’s no picnic for the runner either.

In our pain, we sometimes don’t think about why twin flames run and, instead, we either lash out at our mirror soul, blame them or sabotage ourselves (and our journey toward union). Understanding the why is the key to understanding what next.

In short, it’s all about fear.

What is a Twin Flame Runner? What is Running?

There’s a whole bunch of misconceptions and differences of belief here. I’ve covered the twin flame separation stage before but since most of my readers are the more spiritually evolved soul (and therefore usually the chaser) we often only look at the chaser side of things.

Running is the other side of that equation.

It doesn’t (usually) mean physically running away although it often involves physical distance.

The runner will find a reason that they need to cut things off. Usually, the reason is way off the actual reason but it’s a reason they understand. It fits into their worldview and understanding of what a relationship should feel like.

It might look like a breakup, you might still be in each other’s lives. The separation will still be felt. There’s still that rift between you.

They’ll often throw themselves back towards false twin flames or unhealthy habits.

What Triggers a Twin Flame to Run?


As chasers, it can be hard to understand why someone would do this. Why would they throw away a connection this close? Why don’t they see what you see?

It’s not a logical decision.

Fear. Fear of you. Fear of themselves. Fear of the overwhelming energy they probably don’t understand.

It’s an unconscious fear. They’ll give you (and themselves) a different reason and they’ll genuinely believe it.

The twin flame connection in the early stages often uncovers areas you both need to work on. These fears might well have been buried deep but the twin flame journey is one of healing and improvement.

While it hurts in the short term – they run to prepare themselves to come back together.

The Twin Flame Runner is Overwhelmed 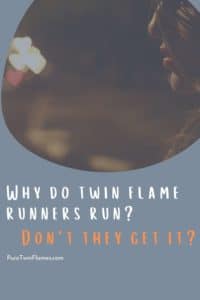 We often talk about ‘soul shock‘ but if you boil it right down – your twin soul is overwhelmed.

They’re often not spiritually advanced enough to accept (or even understand) this level of connection.

They’re overwhelmed because they’re simply not ready to move forward (yet).

Does the Twin Flame Runner Regret?

The idea of the twin flame runner regretting their actions is complicated.

During especially difficult separation phases they might regret some of the things they say or actions they take. They might regret falling back into old habits, routines or false connections.

This phase of the journey causes deep pain to both of you. The twin flame runner’s feelings are no simpler than our own and they go through their own turmoil during this stage.

But ultimately they can’t regret an important part of the process which brings you both together.

Should You Ignore the Twin Flame Runner? 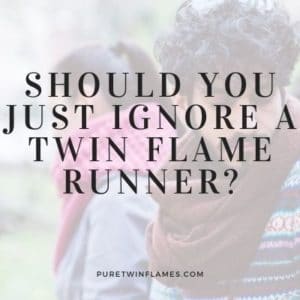 This seems to cause a lot of arguments in the twin flame runner community. There’s certainly a train of thought that you should try and ignore the runner as much as possible.

My view is if you’re not able to focus on your own journey then, yes, you should ignore your runner as much as possible.

However, I think we draw a separation phase longer than we need to if we only take this approach. As long as you’re able to continue to focus on your own journey then continuing to talk to the runner on the physical and/or higher dimensions can help guide them back to you sooner.

How Do I Stop My Twin Flame from Running?

As twin flame chasers this is really what we want to know. How can we get them to understand what’s really going on?

The separation phase is not just a matter of time. If we just sit back and wait for them we might be waiting a long time – or it might not happen at all.

The answer is always to stop focusing on them and bring that focus internally instead.

I know I’ve said this before. I’ll probably say it again. It’s the biggest mistake I see slowing down the journey to union and I know it’s easier said than done.

I started the twin flame coaching for exactly this process and it’s a blended combination of reaching out to guide your twin flame onward on their own journey while focusing on yourself.

Don’t fall into the trap of thinking you only need to help them onward. The runner/chaser roles swap more often than you think and you don’t want to go through this period just to find it prolonged again.

Remember, twin flames run because they’re not ready. The pain of separation makes it far too easy to just wallow but you need to balance helping them onward and not neglecting your own growth.

When Do You Stop Chasing Your Twin Flame?

The short answer? When you’re ready to.

It’s not up to periods of time. It’s not a waiting game. You stop chasing your twin flame when you’re both ready to move on.

Either when you’re both ready to move to the next stage towards union or the roles will reverse and you’ll become the runner if you’re not yet ready yourself.