Symbols are a significant part of any culture, religion, or spiritual group, and the same goes for twin flames. Many different twin flame symbols vary depending on your culture. For example, the Celtic and Egyptian symbols are incredibly different despite both being for the same thing. They are also commonly depicted by the yin and yang symbols or even a heart with an infinity sign going through it.

There are many others, but those are the most commonly seen. Though to be culturally unbiased and knowledgeable for most readers, we will be discussing the more traditional symbol that Saint Germain himself was known to wear.

Remember: There are no hard set rules for a twin flame journey. Use signs and symbols as guidance but not the be all and end all.

Just to avoid any confusion here, if you’re looking for external signs or guidance on your journey then we often talk about twin flame number patterns or spotting specific signs like twin flame physical similarities.

If you want guidance on what’s going on or where to focus your energy you could use signs like this (or a twin flame reading) but here we’re going to focus on symbols commonly used to represent twin flames and the journey.

Some of these symbols have been used historically while others are more modern. 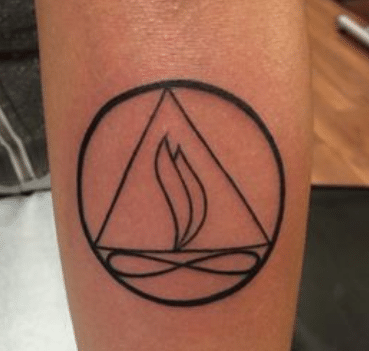 An upright triangle that I will break down by what each different point represents. Inside the triangle, there are two flames inside; if the symbol is colored, one will be yellow and the other orange. The flames can sometimes be seen intertwined or separated, but this is mostly an artistic preference.

Either way, the meaning doesn’t become altered. If anything, this choice adds to the overarching meaning. I will dive further into that later.

Underneath this triangle is an infinity sign or a sideways number eight. All of this is encased by a circle.

This half would represent stability and strength. This point values logic over emotions. This energy, of course, is not out of balance nor toxic. It’s simply protective but not domineering.

Please think of this part of the symbol as the physical needs in a relationship, it is not enough to create a healthy, long-lasting relationship, but it is half of the equation.

To balance out the masculine energy, the right point represents the Divine Feminine.

Like the masculine energy, the Divine Feminine does not need to be a woman; it just needs to be the opposite energy of the masculine. In a truly balancing nature, the feminine values emotions over logic. They are intuitive and creative.

The symbol’s triangle comes together at the very top to show the twin’s unification and their duality. Because the other points balance out the Divine Energy, they can now come together at the top.

Bringing both the physical and emotional pieces together. Once at the top, the twins can be connected in mind, body, and spirit while being in perfect balance. This is all about dual forces colliding and ascending towards union. Without the triangle’s peak, the masculine and the feminine would have no way of coming together.

See the lines connecting the points as a path that the twins will walk. The path is steep, and sometimes they will fall, but eventually, the points connecting are inevitable.

As I previously mentioned, different interpretations of the twin flame symbol change how the flames are displayed. The difference between having the flames intertwined or separated is a wonderful way to show the twin flames’ duality. The idea is that twins are the same side of a coin. When intertwined, they appear to be the same unified and as one. When apart, the twins are still near and share their heat or energy, allowing them to grow even when they are not united.

Past artistic differences, the flames themselves are a representation of each twin. Flames are representing not only their fiery passion but also how bright they are when united. When you put two flames together, the flame only grows. The burning desire twins feel when together is often uncontrollable and chaotic. Things can quickly grow out of control if one is not careful. This a great use of symbolism as a twin’s relationship can quickly go out of control, much like a candle left burning too long unattended.

As the name suggests, the obvious symbolism here is that twin Flames are eternal. Through life and death, they will always be reunited time and time again so they can unite. The bond is unbreakable, and like the infinity sign, the twins will loop back into the other. But as with all symbols, there is more to it than that. The infinity sign is also a sideways number eight, and it just so happens that the number eight in numerology is relevant here. While it is commonly associated with financial stability, which is more masculine, this isn’t just about the role the masculines play here, but also about balance. The number is very balanced, and that is what twin flames are all about. Infinity is all about love and eternity, but it is also about having balance so eternal is actually possible and not just a pipe dream.

Circles are prevalent in symbolism, and it is a beautiful way to close this. The circle incorporates all of the ideas we have discussed. It truly encases the twin flame journey as a whole. It represents cycles and how twins will go through reincarnation and karmic cycles throughout their journey. As we go through different lives, we mature into our higher selves and reach ascension to unite with our twin. Despite being two different people, your souls are unified and whole, and no matter what one twin does, it is a circle. There is no end or beginning. Eventually, the twins have to collide and go on their path together.