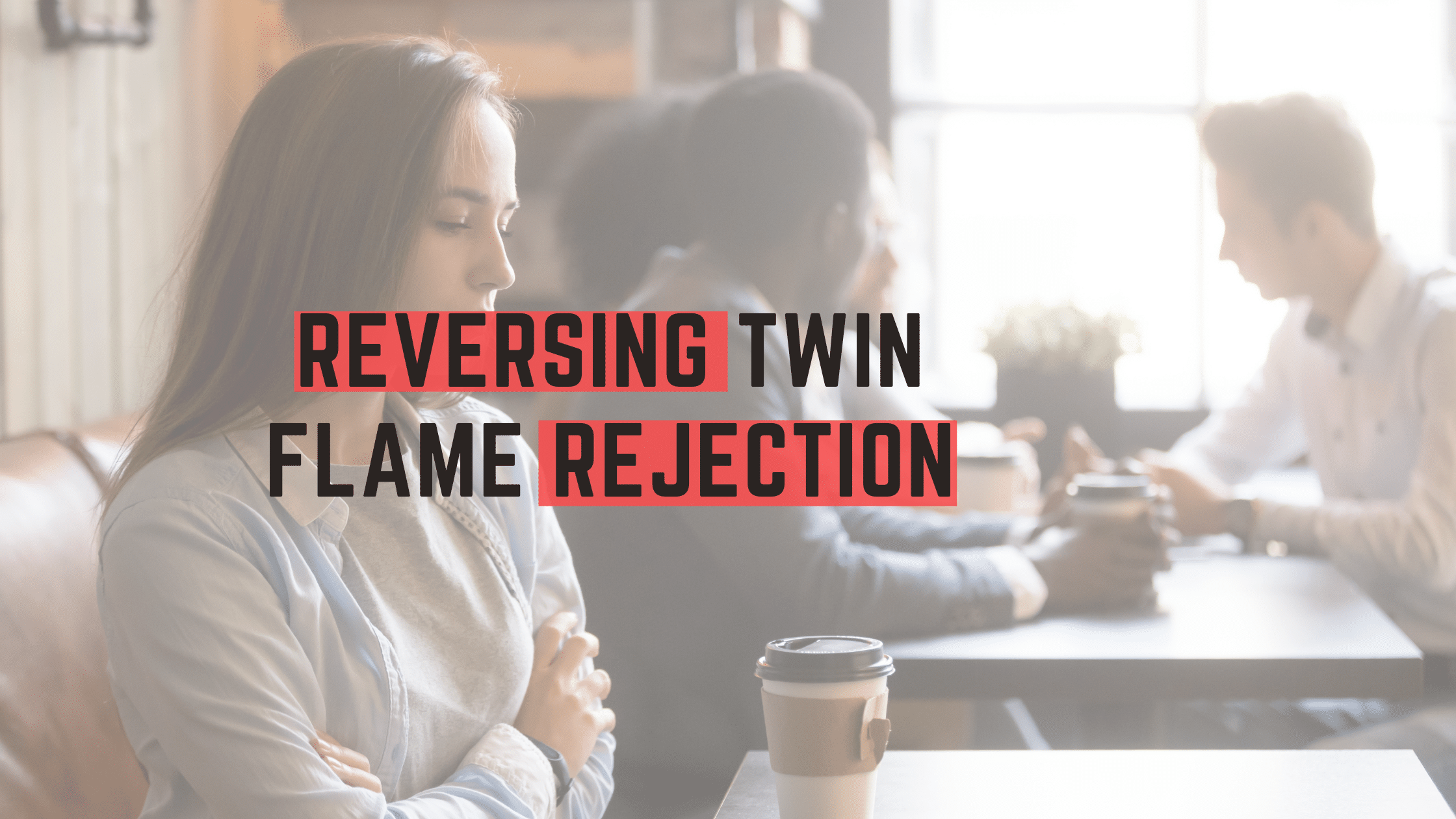 One of the worst twin flames pain patterns is that of twin flame rejection. Nothing feels worse than fearing that you’ll be denied that unconditional love. The soul bond suffers during the separation phase, but the connection doesn’t ever break. That’s what makes it worse – it’s a separation pain that simply doesn’t go away.

Though the twin flame soul bond never breaks, your twin flame can choose to put on hold or stop their involvement in the twin flame journey during this human experience. In a sense, they can choose to reject you, though the rejection won’t mean the end of the soul connection. They’re most likely rejecting you because they’re feeling anxious, overwhelmed and/or deeply triggered by your bond. There might be some unresolved karma hanging over your twin flame bond too. You can win back your twin flame if they decided to put the journey on break, but not by actually chasing them even though they’ve technically become the runner.

Can Your Twin Flame Reject You?

The twin flame soul connection is unbreakable. Whether they want to pursue the path towards union or not at a particular point in time, your twin flame’s soul is always going to be on the twin flame journey. But they can exercise the free will to put that journey on hold indefinitely.

That sense of twin flame rejection triggers some of the worst kinds of suffering and shadows for both parties, even though one of them is actively pursuing the separation through their rejection of the twin flame relationship. So they’re hurting themselves as well by putting the journey on hold, not just you.

It’s never going to be pleasant, but the rejection might in fact end up serving your unconditional love connection.

Why Your Twin Flame Is Rejecting You

There are a couple of reasons why your twin flame might be rejecting you.

First and foremost, you need to understand that they are not rejecting you as much as they are fleeing from the intensity and high level of demanding energies of your bond. The twin flame bond is very intense and brings up to the surface all possible wounds and shadows.

By rejecting you, your twin flame is effectively becoming a “runner”, though I like to call them “avoider” instead. The whole idea of them running suggests that you’d be chasing them, hence the term “chaser” for the counterpart that isn’t running away from the bond. But you can’t really chase someone, can you? The whole runner and chaser dynamic would be better described as avoiding and being committed to the connection.

These roles can sometimes change over the course of a separation phase, depending on what sort of issues come up and what factors are at play. In other situations, there’s one twin flame more prone to running away from the complex and demanding nature of the bond, and one twin flame who is resilient and committed to doing the work and resolving any potential issues.

There is always the karmic factor to consider, which affects the twin flame bond a lot.

You need to remember that you have your own history as your human experience selves, but that’s only the tip of the iceberg for a twin flame bond. You also have numerous lifetimes of karma, each of you on your own and a lot of karma involved in your previous interactions with each other.

All soul bonds are karmic, in that they have a karmic history that affects and influence them. If each of you hasn’t resolved that karma before you come into contact during this lifetime, karma is going to play up its effects and in a way push you into resolving those issues.

The high level of intensity in the twin flame bond can trigger a lot of anxiety in some twin flames.

It can activate several shadows, including codependency, commitment phobia, decision paralysis and so on. If your twin isn’t emotionally and spiritually mature enough to handle this kind of intensity, the entire thing can cause them terrible anxiety.

At the same time, if you’re not yet in union but are interacting to some degree, your simple presence without being truly together can cause them terrible anxiety. They might try to run from that intense anxiety by running away from you and your bond, hoping that it might somehow go dormant – which it won’t.

The intense feelings they have for you and the high level of emotional progress the bond requires of them could also put them in a state of emotional overwhelm.

In such cases, your twin flame could be asking for more of a break than outright rejecting you, but it may feel more or less the same to you anyways. During that break, they could try to get themselves under control, hoping that they will be able to handle things better if they cool down for a while.

If they don’t do the development and growth work though, all of those overwhelming feelings will come right back when you reconnect.

Not Able or Willing to Do the Work

The twin flame bond triggers a lot of shadows within both twins. More likely than not, the twin who has the most troublesome or numerous shadows pop up on them is going to try to shut the Pandora’s box of your connection.

They’ll probably hope that the shadows will go away too. Of course they won’t. Once those shadows come to the surface, they will stay there and press your twin to do the work of overcoming them. The more they’ll postpone that work, the worse they’ll feel about doing it though.

At some point, they might become so intimidated by the work they have to do that they might simply refuse to do it. That’s going to be a serious block in the journey, as they’ll halt the progress which will increase the pressure to get back on the path towards union.

Whether they’ve put the journey on hold for a bit or decided to put a stop to it during this human experience, you’ll feel that dreaded rejection. It may be very triggering for you too.

How to Get Them Back

The truth of the matter is that the only real way to get them back is to focus on your own work and ascension. I know this can be incredibly rough when you’re dealing with something like twin flame silent treatment but it’s all too easy to fall into a trap here.

For one thing, your frequency will always interact with theirs, even when you’re in no contact for a long time. Your energies are forever connected, and that won’t fade away or shut off. As a result, the higher you manage to get your frequency, the higher you’ll help them get theirs through the energetic interaction of your souls. You can’t do their work for them or do enough for the both of you, but you can offer them a basis of higher frequency and help them aspire to have it themselves.

Another way for you to maybe win them back is to focus on sending them a healthy dose of that unconditional love that connects your souls. It won’t simply make the twin flame connection work as if by magic, unfortunately. But showering them with your high vibe love will slowly help them step out of the darkness of their shadows. If they’re blocked for a while, it can help them make a bit of progress – may be just enough to regain their confidence in their own devices and get cracking on that shadow work they need to do.

While it’s frustrating to hear and contemplate, there’s nothing else you can do to win them back but give divine timing the space to work its magic. Be strong in your faith in the universe and your higher power, but also in the sacred mission your souls have embarked on.

If you’re wondering what to do when your twin flame rejects you and how you can deal with twin flame rejection, then the answer is simple and yet terribly complicated: the best you can do is to focus on your own high frequency.

There are many factors that come to play in all our human interactions, but much more so in a twin flame bond. All of the elements like karma, anxiety, feelings of being overwhelmed, inability or unwillingness to do the shadow work – all of it affects your twin flame’s frequency and their ability to ascend.

Your frequency also comes into play. The higher your frequency and the more unconditional love you send their way through your twin flames bond, the higher their own vibe will be able to go. It can’t replace their own work and progress, but it can help support them along the way.