Have you ever been so attracted to somebody that it felt like they were literally pulling at your heartstrings? We use that term far too easily sometimes (much the same way as we throw the term soulmate around) but twin flame intense attraction can literally feel like they’re pulling on your heart.

The twin flame intense attraction is a spiritual and overpowering connection between two halves of the same soul. It’s an emotional rollercoaster with a magnetic pull on each other constantly.

So why is the attraction between twin flames so intense? How do you spot this kind of attraction and how can it help your journey to union?

Why is The Attraction Between Twin Flames So Intense?


Frustratingly, this is one of those times you just know when you know. I won’t be able to put into words just how overwhelmingly intensely you’ll be attracted to your twin flame compared to a ‘normal’ 2D relationship.

This goes beyond simple physical attraction. This is two parts of the same soul coming back into contact with each other.

The twin flame relationship goes beyond ‘normal’ attraction or a soul mate connection. The senses between soulmates are overwhelmed by their attraction to their twin flame and… it’s an experience that is very hard to put into words.

It’s kind of like a strange mix between feeling at home and safe while at the same time being overwhelmingly aroused.

It’s a magnetic attraction that is constantly pulling the twin flames together, even if they’re miles apart and not doing anything to maintain contact or acknowledge each other.

It won’t compare to anything you’ve previously experienced. 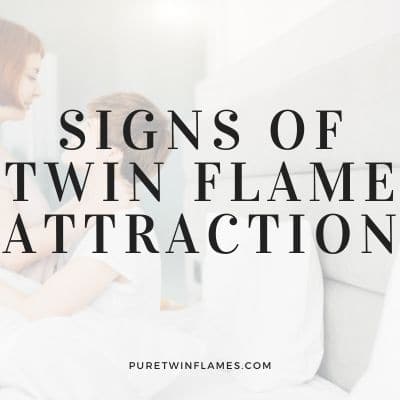 You might have heard me say this before but there are no hard-set rules on this journey. Your journey will be unique from mine and everyone I speak to – but there are some main signs you can watch out for.

First of all, there is an emotional attachment that feels like nothing else in your life before. You may find yourself feeling inexplicably happy, safe and motivated around them.

When twin flames first meet it’s not always going to immediately be a love connection. You might even hate each other at first. What is almost universal is there will be high energy between the two of you.

This is the twin flame connection building up from a distance before you come together. The two of you have been communicating before you ever physically met so think of it as a static charge slowly building up.

The high energy will be like nothing that you’ve ever felt in your life. It’s not just an emotional attachment; it’s a magnetic attraction finally coming together (potentially after multiple lifetimes).

I can guarantee this energy is also noticed by your twin flame however, depending on where they are on their journey, they might not be able to acknowledge or even understand the attraction they’re experiencing.

We have a lot of posts about twin flames in other relationships. We’ve covered things like your twin flame being married and that often means some kind of physical attraction to someone else.

It’s entirely possible to be physically attracted to a false twin flame. I hear a lot of stories from people on their journey and this isn’t entirely uncommon.

But you’ll know the difference (as will your twin). When I call it intense attraction it’s because I don’t even think the word attraction gives it justice. Once you meet your twin flame you’re never going to feel the same kind of attraction towards someone else.

It feels like you are magnets for each other, unable to get enough of one another. Sure, you can feel physical infatuation for someone (especially during the early stages of a relationship) but this kind of attraction not only goes beyond that, but it also doesn’t fade over time.

Does Your Twin Feel This Attraction?

In the earlier stages, it often isn’t clear that your twin flame is feeling this same level of attraction. I can promise you that they’re feeling something but not that they understand what.

As time goes on and you feel more comfortable in your relationship with them (which is often when twin flames finally meet), they will likely start to open up. As they further their own spiritual development they’ll begin to understand this energy better and the attraction will be more and more evident.

Are You Always Attracted to Your Twin Flame?

I’ve spoken to twin flames who feel asexual and don’t actively seek a physical connection with their twin. In my experience, this isn’t common but it doesn’t mean you’re not on a twin flame journey.

The intense attraction is part of the journey towards union. It sometimes isn’t an instant attraction and will manifest further down the road (sometimes even years after you first meet) or maybe you’re both happy without a physical component of that connection at all.

The intense attraction is part of the journey to union but doesn’t always instantly manifest and this attraction goes beyond simple physical cravings. Basically, don’t try to judge your twin flame journey based purely on if or when you feel attracted to them. 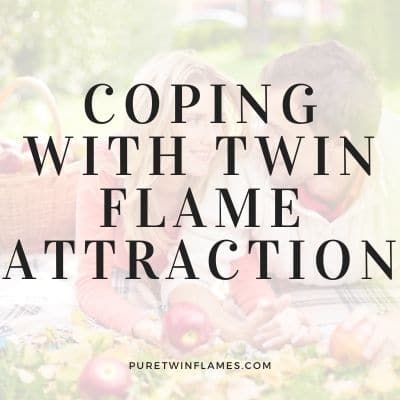 The intense attraction between twin flames… can be a double-edged sword in the earlier stages of your journey.

It’s hard not to get swept away by the emotions and just let go of control. Trusting your twin flame, even when that trust might be blind because you’re so focused on each other… is easier said than done at times.

There are moments where one (or both) of you might feel like it’s just too overwhelming and this can manifest in a lot of different ways. The attraction is generally what causes you to repel and begin a separation phase when you’re not ready for it.

It’s not uncommon for the twin who begins to feel uncomfortable in this intense attraction phase, to start running. This can come across as a lack of commitment or trust. But it is just that person’s way of regaining control and space – something which they might need at the time in order to heal from past experiences.

Often, the runner won’t even be able to explain to themselves why they’re running – but they’ll try and frame it in a way that makes sense to their worldview.

The twin who is still experiencing intense attraction (and understands the path you’re both on) will feel it on a deep level and often have an emotional response. They’ll want to know what’s wrong with them or their relationship that they’re not enough for the other person. This can lead to feelings of shame which will then manifest as anger, resentment towards themselves and the situation.

There are many reasons a separation phase can hurt and the loss of this physical connection can feel high on that list. How you handle this can dictate how quickly you’re able to move on to the next stage.

The intensity isn’t all a bad thing however, it can be used to help further your journey too.

Using the Magnetic Pull Toward Union

While the attraction can cause problems in the earlier stages you can also use this magnetic pull to help guide your twin on their journey.

Assuming you’re the more spiritually aware twin (you at least know the term twin flame) you can use this pull to guide your mirror soul through a difficult time. This does not mean you should abuse the connection to try and manipulate them or speed up the process towards union.

This has to be done carefully otherwise it can absolutely backfire.

Allow them to maintain space when they need it and respect their boundaries. This attraction is not just about lust but also means they’re going to be attracted to you to feel safe and emotionally supported. Treat that trust properly.

If you’re feeling stuck on how to further your journey, tell me about your path so far and I’ll do my best to help guide you.