The idea of twin flame friendship and twin flames being platonic is… a quagmire. There are many parts of the journey people disagree about and this might be one of the biggest.

In some sense, twin flames can just remain platonic friends in a single lifetime.

This is my experience speaking to thousands of twin flames at different stages of their journey. From what I’ve seen, sometimes twins can be close enough to not drive each other away but not close enough to be ready for a romantic relationship.

Important: I do not think this is a good reason for just accepting the status quo if you’re in a period of separation or you want to progress your twin flame relationship. Just because you’re platonic friends now – doesn’t mean it has to stay that way.

I believe twin flames are destined to fulfill a romantic blueprint of their journey together but that doesn’t always mean it’s going to happen in this lifetime.

Whether or not you stay just friends with your twin flame in this lifetime might be entirely down to how you treat the journey.

I think twin flames are destined to live out a romantic (and sexual) relationship in the long term.

But, what you have to remember, in the long term for twin flames could mean multiple lifetimes. That means in this lifetime you might remain ‘just’ friends with your twin flame.

The romantic relationship might be in another lifetime. Just because I accept the possibility of this doesn’t mean I think we should just accept it.

If you’re aware enough to not only know what a twin flame really is but know who your twin is it’s an already rare opportunity. If you’ve met them it’s likely taken many lifetimes just to get to this stage.

I don’t think we should waste this rare opportunity and just accept a platonic twin flame.

Obviously, every journey is different. Perhaps there’s a false twin flame situation or one of you simply isn’t ready. It happens but it doesn’t mean that giving up on your journey is always the right answer. 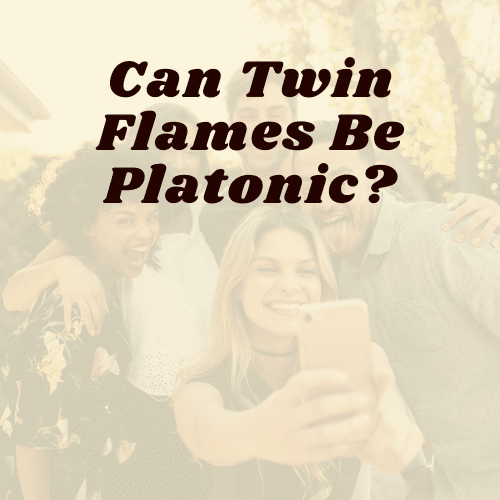 Can Twin Flames Be Friends During Separation?

Yes, but you have to tread very carefully here.

It’s not uncommon for twin flames to be friends during separation but too often I’m seeing this become a trap for people. Looking for signs your twin flame loves you and paying attention to your journey is fine.

In some ways, this might be the ideal because you don’t have to deal with as much pain from the separation.

As long as this isn’t becoming your focus.

Spending time with them as a platonic friend might be good for both of you and might even help further your journey even faster, as long as you’re still working on your inner progression and not just waiting for them to turn around and see you in a new light.

Can Twin Flames Be Friends Before a Relationship?

Your twin might even be your best friend without a romantic thought towards them.

There’s an idea that twin flames have to immediately be in a romantic relationship but if the lines between twin flame stages often blur and the first encounter isn’t always romantic at all.

Are You Perhaps Soul Mate Friends and Not Twin Flames?

The relationships are complicated and (often) misunderstood even by those inside them. Often when I’m asked about twin flames being platonic friends my first instinct is to make sure you understand the difference between twin flames and soul mates.

Soul mates can be platonic friends while you’re still on your twin flame journey. In fact, they make fantastic friends and help further both of you onward on your path.

Forget this Hollywood idea that soul mates are the ideal type of love (twin flames know better than this) but this person might be your soul mate which is still an incredibly rare connection that should be cherished as an incredibly close friend for the long term.

Signs and Benefits of a Twin Flame Friendship

There are (of course) some benefits to being friends with your twin flame. The same way as romantically connected twin flames push each other to be the best possible version of themselves – twin flames as friends are not your average BFF.

I still don’t think this is something you should settle for, but if it does happen there are some benefits to being friends with your twin flame.

How Do I Know if My Twin Flame Reunion Has Failed?

At times things can certainly seem hopeless. I’ve spoken to more than a few on their journey who gave up at one point or another and eventually went on to reach union.

But you’ll never really know that your chance at a romantic reunion with your twin has failed unless they pass away in this lifetime.

How to Be More Than Friends With Your Twin Flame

I’ve talked about the idea of the twin flame friend zone before and (in short) I don’t think there is one. On the higher levels, you both know exactly what you are to each other.

I don’t think there’s ever a moment when a romantic future isn’t a possibility when twin flames are on Earth at the same time. As much as twin flame friendships do have some advantages, I don’t think we should ever forget this possibility.

If you really want to be more than friends with your twin flame but the connection isn’t currently romantic then you need to remember why this connection was forged in the first place.

The entire purpose of the twin flame journey is one of self-improvement. It’s a spiritual journey to push both mirror souls to heal and improve themselves and the only way to further that journey together is to first focus on healing internally.

This can manifest in many different ways for different people and there’s no exact 3 step program that will do everything for you (though I do try with twin flame coaching).

Whether you choose to accept your twin flame is just a platonic friend is up to you. I won’t tell anyone what they should do because your journey is certainly your own but I (personally) wouldn’t resign myself to being platonic friends with my twin flame unless I knew it was the right thing to do.

Twin flames are more attuned to their intuition than most. What does your gut tell you? Is this time on Earth to just be spent as platonic friends or is there more to your journey in the future?