Are you seeing angel number 919 during your twin flame journey? What is 919 trying to tell you and (more importantly) how can this message help you reach union faster?

919 for twin flames is a symbol of a journey coming to an end. This can be an incredibly good sign for reaching union with your mirror soul.

The first 9 symbolizes a spiritual path and the 19 tells us that path is coming to an end. There’s a major change on the horizon or at least something significant about to happen.

You may be feeling stuck and confused right now but know that you’re not alone here. The universe wants nothing more than for twin flames to find their way back to one another so they can finally live in peace and harmony together once again but that doesn’t mean it’s guaranteed. There might still be a final step needed.

What does angel number 919 mean for twin flames? Why do you see it? Is 919 a twin flame number?

What Does 919 Mean for Twin Flames?

Throughout their twin flame journey, twin flames will come across many significant angels numbers (whether they consciously notice it or not). Angel number 919 might be one of the most important numbers you’ll see because it marks part of the path coming to an end.

Angel number 919 is one of the most important angel numbers twin flames will encounter on their twin flame journey.

For twin flames, angel number 919 might be offering protection and not just guidance. If you’re seeing this number pattern during a rough stage it might be the universe trying to shield you from the worst of it.

Angel number 919 for twin flames does not mean you’re guaranteed to reach union. It’s certainly a good sign and I’m ecstatic for you if you’re seeing this number frequently, but it isn’t quite time to relax yet.

What Should You Do When Seeing 919?

Seeing 919 is a sign that twin flames are on the same path (even if they don’t know it). They’ve both moved further down the path to union and this is a great sign to see.

It might even be a symbol that one twin has completed their work and is just waiting for the other to awaken and take that final step with them.

Even if you feel like this is you – you should continue working on yourself. Chasing your self-improvement and healing will trigger your twin to do the same and that might be the last push they need.

No matter how things might seem on the 3D, the twin flame journey goes far beyond that and things are better than they might seem.

If you feel stuck (or you’re just looking for some help) let me do a twin flame reading for you.

Seeing 919 When in Separation With Your Twin Flame 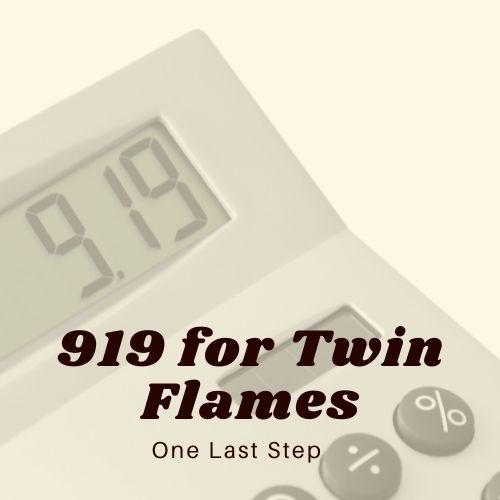 If you’re separated due to circumstance or physical distance beyond your control, 919 is telling you this is not permanent. The separation might be difficult but it is serving a purpose by giving you both space and time to heal and prepare for the next step.

This is always the reason for separation but if you’re seeing this symbol, it has worked and this separation stage is coming to a close.

919 in your twin flame timing or in your personal numbers is a message from the universe that this is not permanent. There was probably something hanging over you from your past that you needed to learn and grow from.

Now, remember. Twin flames have no timeline so just because the universe says the journey is ending that doesn’t necessarily mean it’s ending this lifetime. The soul contract can play out over multiple lifetimes.

This is why I don’t like the idea of just waiting for the universe to deliver. Take this symbol of improvement and run with it. Push yourself and your mirror soul onward and make sure you reach union in this lifetime.

The best way for twin flames in separation with each other to keep their connection strong is by working on themselves spiritually. When we do this we tap into our higher self and find out who we truly are and what purpose we were born with.

When you’re seeing an angel number like 919 you’re definitely at the stage of both having this symbol showing up. I don’t often speak in certainties but here, I’m pretty certain.

Whether or not your mirror soul is aware of the number, I don’t know. They’ll certainly be guided by it subconsciously whether they know they’re seeing it around them or not.

At this stage, it’s likely they’re at least somewhat able to see what’s going on but every twin flame couple is different in terms of spiritual progression.

Angel number 919 might not be talking about your twin flame journey. It could be pointing to a different area of your life but if you’re seeing other signs (such as twin flame runner awakening signs) then it’s pretty clearly talking about a big shift in your journey.

If you’re seeing any other angel number patterns at the same time as 919 then it’s likely you’re being told there’s one final thing for you to focus on and this number is pointing you in the right direction.

It’s going to take me a while to cover all of the twin flame number sequences possible but pay as much attention as you can to where you’re seeing this pattern, which alone might make it clear.