What does angel number 1133 mean for twin flames? If you’re seeing this pattern on your journey, where is it coming from and how can you speed up your reunion?

Angel number 1133 for twin flames is telling you that you’re on the right path and giving you a nudge to continue your work to reach union. Things are progressing well, but there’s still work to be done.

There’s potentially an opportunity for a shortcut here. Angel numbers often show up on a twin flame journey when there’s something active you can be doing. 1133 is also a great confirmation sign if you’re dealing with doubt – it’s a good omen for reaching union in this lifetime.

The 1133 meaning for twin flames is like an attaboy from the universe. It’s not a pattern that (in itself) is telling us we’re reaching union overnight, but things are going well (even if it doesn’t always seem like it).

You’re both on the right track and progressing on the spiritual journey.

Angel numbers can be seen as messages or signs from angels, spirit guides as well as both mirror souls on the higher dimension. No matter where it comes from, if you’re seeing this twin flame number pattern show up around you – it means you’re on the right path.

Whatever you’re doing, your work is being rewarded and you’re moving towards union.

There is also some advice on how you might speed things up.

Start paying attention and taking note when you see this number in your life. What were you doing? Where were you? What were you thinking about? Angel numbers can show up around specific events to try and draw your attention in that direction.

The 1133 pattern often suggests the use of active manifestation techniques and if you’re seeing this pattern repeatedly, I would suggest actively working with twin flame affirmations.

It doesn’t suggest making big changes overnight (as some number patterns certainly do) but more of a call to take a wider view of your journey. Have you been neglecting any specific areas of your life where you could maybe pick up the slack?

This might not be immediately obvious to you but take your time with it. If you’re feeling stuck or just want some guidance I can try to help with a twin flame reading.

Also, remember that you’re not alone in this journey. You never are. 1133 is a balanced pattern as is the yin and yang of the twin flame connection. Even when it doesn’t always seem like it – both of you have furthered the journey. 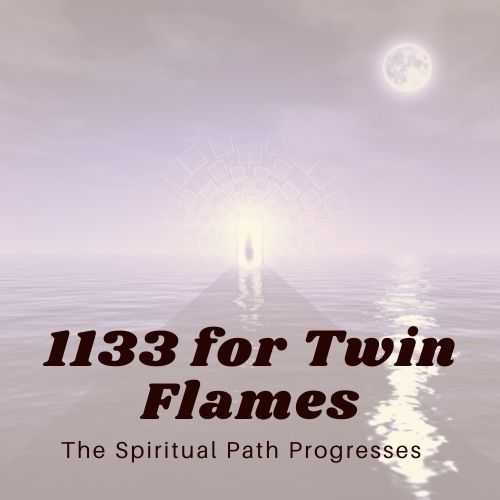 Seeing 1133 When in Separation With Your Twin Flame

When twin flames are separated, angel number 1133 can be seen as a reminder to be patient. I know this is a lot easier said than done but remember this stage of your journey happens intentionally.

It’s a reminder not to give up but also not to obsess over the short-term or the physical problems.

Struggling with doubt and impatience is normal at this stage but 1133 is a call for perseverance. Things might start to speed up now that the universe is giving you a push in the right direction but it’s a marathon. Not a sprint.

It can be easy to become discouraged but now is not the time. The universe wants twin flames to reach union and the fact you’re both aware of the journey and of these number patterns from the universe is a big deal.

You have a real opportunity here. One most of humanity won’t have in this lifetime. You owe it to yourself (and your mirror soul) to take this as the sign it is.

Angel number 1133 can apply to any kind of spiritual journey where progress has been made. That in itself isn’t entirely confirmation of a twin flame connection but it’s certainly a good sign.

If you’ve done enough to get this kind of message from the universe then you’ve both followed your spiritual path in some form. You’ve moved towards love, happiness and enlightenment and a symbol like this is a gentle nudge to continue doing so.

You might see a number sequence like this by itself or in combination with other signs from the universe. If you’re seeing others, it’s likely that your path is furthered sooner rather than later if you follow their message.