What Are Master Numbers?

The Master Numbers are 11, 22, and 33. The rest of the double-digit numbers from 44 upward are called Power Numbers.

The Master Numbers involve the sacred numbers 1, 2, and 3, which are involved in the trinity or triangle of creation. Their vibration is exponentially more powerful in the format of the Master Numbers.

These numbers talk about spiritual enlightenment and the stages of creation: vision, building, and teaching or delivering. We’ll talk about each of the three Master Numbers and what they mean, and then we’ll see what messages they might bring in the context of the twin flame journey.

Remember! Number patterns can go far beyond master numbers. If you haven’t already read it, I suggest reading the guide on twin flame numbers. These numbers often serve as a course corrector so if you’re seeing them – there’s likely something you should be actively doing to further your twin flame journey.

What Do Master Numbers Mean for Twin Flames?

Twin flames can see the Master Numbers as synchronicities, like showing up in phone numbers, as time on the clock for the 11 and 22 ones, or as license plates out in the street.

But beyond these synchronicities which will bring them back into focus, it’s likely that those on the twin flame journey will have these Master Numbers in their Life Path number, destiny number, and/or soul urge number.

When your Life Path number is 11, 22 or 33, you don’t reduce it to a single digit because there’s a deeper meaning to the Master Number as it is. As a twin flame, that meaning is all the more important.

Master Numbers carry very important messages from your guardian angels and the divine. When these divine messages show up in your physical reality, there’s always a spiritual awakening and spiritual growth involved. Your twin flame connection is going to a higher level.

Twin flames in particular could see the Master Numbers at points of their path when they’ve hit particularly rough patches of their soul journey and their guardian angels are showing their support. Seeing the Master Numbers is a positive sign that things are going in the right direction with the human experience of the mirror souls, or that they’re headed in the right direction and will see progress sometime soon.

If they’re still building the solid foundations of their spiritual growth, seeing these numbers means they’re doing the work and will experience growth soon. If they’re just starting out a romantic connection with their twin, it’s a sign that the strong connection is so much more than just romance.

You might also see these Master Numbers as confirmation of your divine mission or as a message at the spiritual level from the divine realm that something major is about to unfold in your human experience. We’ll talk a bit about each Master Number to explore what meanings might be behind these actual signs.

Master Number 11 is most likely one of the most well-known numbers in twin flame numerology and a clear confirmation of your twin flame status. Some see it as the original life path number for twins, but it’s important to keep in mind that not having this Life Path number doesn’t mean you’re not a twin flame.

The actual message behind angel number 11 and Master Number 11 involves the major role played by the Master Visionary in the process of creation of a blessed New Earth.

The Visionary imagines a better, more blessed, more high vibe world. He co-creates that reality with the help of the higher dimensions he has access to by planting the seed of growth. He also receives spiritual and cosmic messages that he integrates into earthly reality.

The numerical frequency of 11 speaks about the 5D unconditional love frequency which the twin flames naturally tend to harmonize with as part of their human experience since it’s the spiritual vibration of their souls.

In the initial part of the twin flame awakening stage, the twins aren’t necessarily aware of doing that energetic work, but the nature of their souls does the work for them in that regard, whether they’re aware of it or not.

But in a bit of time, when they reach the conscious awareness awakening stage and they gain more confident energy, they become aware of the vibratory frequency they are anchoring in the 3D. 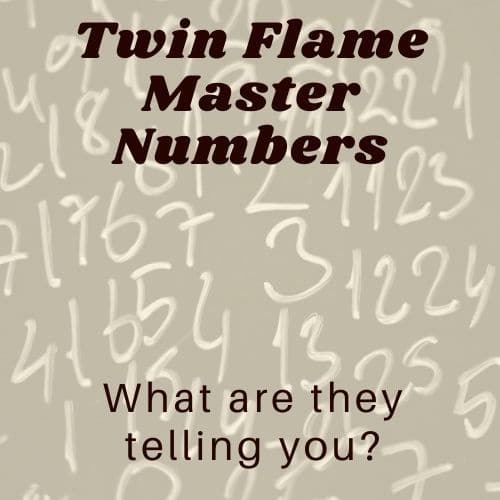 Master Number 22 talks about the powerful co-creator energy of the twin flames as architects of the new world the seed of which Life Path Master Number 11 has planted.

The personal experiences of growth of each twin flame couple raise the frequency of their own souls but also of the souls and the earthly reality around them.

Through their amazing experience of connecting and manifesting their union desires into reality, they manifest a new world. They build a new reality that’s high vibe and more in tune with the truth and essence of their souls: unconditional love.

Seeing angel number 22 means that as a twin flame you’re going to start your Master Builder work soon and you’re going to see a major goal manifest into reality after a serious time of work and effort.

The highest frequency of the trio of flame number sequences, 33 is the Master Number of the most advanced soul when it comes to the concept of soul mirrors. They are the highest vibe twin soul family.

Number 33 achieves not only its own balance in life and divine ascension but shares the wisdom and teaches others so that its soul circle also ascends with him.

This is as close to an angelic master confirmation as you can get in the 3D. These are the highest vibe souls, those that light the way for others in their soul family, those that find time in their busy lives to bring blessings in the everyday life of others. They share the wisdom of their blessings in life and support others in experiencing the beauty of life through spirituality and fulfilling your life mission. Master Number 33 twins are authentic and enlightened twin flame gurus and highly spiritual and advanced souls which have reached spiritual enlightenment.

If you’re seeing 33 for twin flames, this is a fantastic sign of an approaching union.

You should pay attention to Master Numbers, especially when they come up as Master twin flame number sequences: the 11-22-33 Master Number series is a very powerful confirmation that you and your twin have ascended and are very close to achieving divine union.