Let’s face it: you’re going to run into some issues when trying to figure out how to explain the twin flame connection, whether it’s to your actual twin or to the general public.

Sometimes even to yourself.

Since soul mate relationships are more widely known and understood, you can use that as a great starting point to explain the concept of twin flames by focusing on what’s different about the twin flame relationship compared to the soul mate connection.

I’m constantly finding myself remind people but opinions vary on twin flames. A lot of the journey involves things we don’t (and might never) fully understand and that makes it even harder.

To make it slightly easier I’d make sure you understand the difference between soulmates and twin flames (since that’s bound to come up) and you’re able to explain what a twin flame is.

Why Some People Have a Hard Time Understanding

The notion of twin flames is a very New Age and modern type of thing for many people. Even though the notion of romantic soul mates is very similar in many regards, it’s more commonly known and understood because it’s a bit easier to get in terms of complexity.

Not to be mean or anything, but the level of complexity of the mere notion of twin flames is pretty tough for some to get. If you add to the mere notion more of the nuances, intensity, and complexities of the specific traits of the twin flame relationship, it gets even tougher to get or explain.

Because of the intensity of the twin flame relationship and the very much welcome wider awareness of the notion of toxic, abusive, and codependent relationships, the potential “on and off” type relationship that some twins have can ring more like toxicity and co-dependence than of a twin flame union which is sacred in nature.

You can’t blame people for being critical or on the lookout for a toxic relationship in the life of someone they care about or in the life of anyone around them. It’s not their fault that they don’t know that much about the twin soul relationships, and if and when you try to explain it the first few times, it’s not all that surprising that they wouldn’t really get the core concepts of these types of relationships.

As if the journey wasn’t confusing enough.

In fact, some twin flames are deceived by false twin flame connections at some point in their twin flame journey. So we can’t really blame outsiders for not being so sure about this whole thing, when in fact we as twins sometimes have issues with identifying our true divine counterpart.

Close ones might worry about the fact that you’re only clinging to your ex, which does happen. It might be difficult for them to see how you’re just going through some of the more painful and triggering twin flame stages and simply clinging to the idea that you’ll get back together with an ex.

If it’s coming out of love, you can’t help but appreciate it for the intention behind it. But it might get annoying to have to constantly explain why you and your twin flame are not nearly done with one another.

Why Would a Spiritual Connection Involve Intense Sexual Energy?

Some people have a hard time making a connection between the idea of something being sacred or divine while at the same time involving such a high degree of physical attraction and sexual energy.

You can’t blame them much for that, since religious beliefs have been spending thousands of years separating the idea of sexuality from anything that’s divine, holy, or blessed. There’s a level of puritan thinking which tries to elevate someone’s frequency by making them deny their own natural impulses and tendencies, including sexual ones.

That’s a bit like outlawing cards because if used the wrong way, they cause accidents. We all see the merits of accidents not happening, but I’m sure we’d rather get rid of them through cautious driving rather than through taking away everyone’s cars, right?

Sexuality can be sacred precisely because it’s a natural part of human nature as an expression of the divine nature of all things.

It’s not going to be sacred because it’s sexual, but because it’s a manifestation of unconditional love, harmony, and unity. As in pretty much all areas of life, its nature doesn’t rely on the details as much as on the intention and core truth behind them.

When it comes to twins, in fact, physical contact and sexual contact can even trigger spiritual awakening. In the twin flames situation, sexuality truly is an expression of the divine feminine and divine masculine energies merging.

Some people might liken the divine sexuality vibe to that of some intensely sexual previous relationships of their own, which were most likely based on very low frequencies.

Because they might equate that intensity to the powerful soul bond expressed in sexual terms as part of the twin relationship, they could think that it’s all about the hot sex and unrealistic expectations about having the butterflies forever and a never-ending honeymoon phase.

Because their own notions of sexuality are based on an entirely different kind of vibe, they might not be able to relate to what twin flame intensity is all about and might even label it as sexual addiction or obsession.

Everyone Is on Their Personal Journey

In most cases, people have issues understanding something because of their own issues, shadows, and hangups. Some are going to be deliberately obtuse, which is also an issue of lack of spiritual and personal growth and development.

It’s not on you to show them the light when it comes to their own progress towards individual growth and spiritual understanding. That’s on them.

We just have to accept that some people have their issues and self-limiting beliefs and ideas that we can’t resolve for them, and that’s all right too. Everyone grows at their own pace and we all deal with our own growing pains, twin flames or not.

How to Explain This Kind of Intense Connection 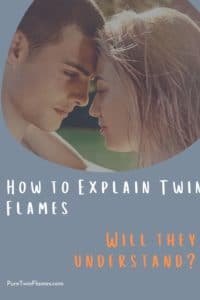 Understand your Own Twin Flame Energy

Of course, the first true step towards explaining a twin flame relationship to someone else is to actually fully understand it yourself. You might think you do just because you’re a twin, but it doesn’t quite work like that.

Before you can truly have a romantic relationship as a manifestation of your twin flame connection, you need to have a healthy relationship with yourself. The twin flame energy is going to work on the foundation of personal growth and spiritual development that you build for your own ascension.

The life partner you can be blessed with as part of this process is an added bonus if you will.

Explaining Things to Your Twin Flame

Note: If this is the stage you’re at (or considering) I have a complete guide on when (and how) to tell your twin flame. This needs to be done carefully unless you know for certain they’re ready to hear it.

You might be a bit further ahead in the process of spiritual growth than your twin. If that’s the case, when they’re your romantic partner you’re going to want to talk to them about the twin flame journey.

You’ll find that when you start to share with them some of this information, they’ll instinctively know the truth of it because the twin souls bond will vibrate in the frequency of truth. They’ll have that sense of recognition about the ideas that they had about you as their twin, even without being able to put a name to it.

How they’ll react to this profound truth though, that’s another matter. If they still haven’t done at least some of the work on their core wounds, they might go into denial and initiate a separation phase. Don’t freak out about it. Every twin flame relationship has its own problems, and it’s perfectly normal. Resolving them is only a matter of resolving issues at a soul level.

Explaining it to Others

I’m all for educating and supporting people on their path towards ascension. But I’ll also say that we’re not all on the mission to be the teachers of everyone or anyone else.

Give it a good shot when it comes to explaining the whole twin flame thing to someone, sure. But if you see you’re met with resistance or rejection of the concept, live and let live, as they say. Allow those who have a teaching life purpose to fulfill theirs while you work on fulfilling yours: divine union.

Those who love you and are a relevant part of your life will see you grow and truly blossom as part of your process towards overcoming the separation phase and making progress towards achieving union.

They’ll naturally respond to the raised frequency you’ll radiate as you do your shadow and inner work and they’ll instinctively understand that there’s so much more to this bond than what meets the eye.