Twin flames are neither opposites nor identical but there certainly are some noticeable similarities and differences between them.

If you’re newer to the journey, I’d suggest reading the guide on what a twin flame really is.

It might be tough to process it since it seems to be a contradiction in terms, but twin flames have numerous similarities and also numerous differences between them. They are eerily similar and yet considerably different. At different points in time, the emphasis might fall more on the similarities or on the differences.

When it comes to your flame dynamic, the core principle is that of a deep spiritual connection based on similitude at a soul level, but not similarities like you see in biological identical twins.

You are twin flames meaning twin souls, and yes part of the same soul family since your twin is your mirror soul, but you’re not genetic twins.

One thing you can count on is that you and your twin will never be polar opposites or identical. Not really. Let’s talk a bit about your physical similarities and differences.

People often feel that there’s such a striking similarity in twin flame couples. The twin flame connection doesn’t involve actual facial similarities as such since the genes are going to be pretty different between the twins, but there will be other things which the twins will share and they’ll make them seem eerily similar.

While your facial features are likely to be very different, there will be notable similarities when it comes to your expressions. You might say that’s not specific to a twin flame relationship necessarily, since all couples who stick together for long enough tend to mimic each others’ expressions and mannerisms. And it’s true. But in the case of twin flame couples, those eerily similar expressions on their faces won’t be a result of time spent together, but a thing they have in common as soon as they meet.

Another thing they’ll have in common is the symmetry of their faces. You might have noticed that in the case of some long-lasting couples, if you take their faces, do a split image down the half of each of their portraits and then put these halves together, you’ll see some interesting symmetry going on. When it comes to twins, it’s very likely you’ll see that happen as soon as they meet.

Your faces might seem very similar also because you’re very likely to have highly similar tastes when it comes to things like hairdos, hair dye, eyebrow shape, makeup, piercings, tattoos and various other style-related things going on with your face. All of those things can make you seem similar even though you don’t truly look alike.

People might find there’s a striking resemblance between your physical traits too. In fact, your bodies won’t necessarily look alike as some sort of confirmation of your twin flame relationship. But your twin flame connection will result in you having plenty of habits and behaviors in common that will give the overall sense of you looking alike.

You are likely to have a similar constitution, which is not based on your actual bodies being so alike but on your proportions being very similar. That’s going to be a direct result of you two having similar tastes when it comes to your diet and similar levels of interest in working out. Your postures might be very similar as soon as you meet, too.

So much of that relies on personal views on health and beauty, which are a direct result of the twins showing their personalities. Even when they come from very different backgrounds, twins tend to share core beliefs and soft spots. They might both have a sweet tooth, or one might have a sweet tooth while the other one has a terrible weakness for carbs, but in the end the result might be the same: you might spend similar amounts of time at the gym in order to burn away the results of your culinary inclinations.

You could have very similar tastes when it comes to clothes or the same sense of style overall, which might further give off that vibe of uncanny similarities between you two. Even if you won’t dress exactly the same and might even have entirely different overall styles or color preferences, that very personal way of putting clothing items together that is based on tastes might be very similar, making your styles seem very similar even when they’re not.

All of these similarities will be a direct result of your similar natures, which in turn will be based on your shared essence at the soul level. There are going to be numerous similarities which can jump out at you as soon as you see your twin in the 3D.

That’s why even a chance encounter can result in deep soul-level recognition. Those similarities will jump out at you and you’ll recognize yourself in your twin, even without being able to put your finger on exactly what it is that makes you feel so similar to them at first glance.

Do Twin Flames Have the Same Personality? 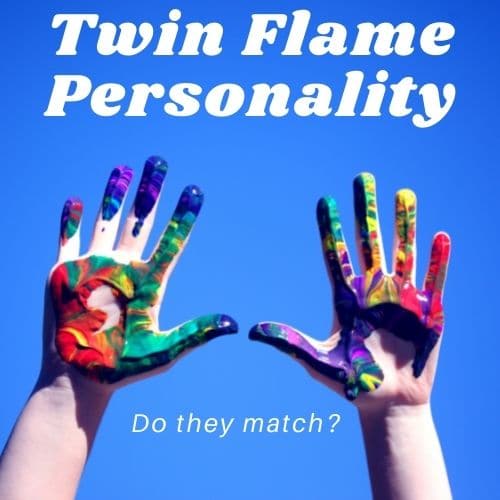 When it comes to personality, traumatic events play an active role in shaping up who you are. And twins tend to have many wounds in common. While the events that caused those traumas might be different, the nature of the trauma and its consequences are likely to be very similar.

These similarities play a huge role in all the rest of the similarities between twins. At the heart level, your twin is the one person in the entire universe that truly gets you because they’re made of the same stuff as you. The energetic bond between you means that there’s a constant exchange of energy going on. You’re likely to go through the same energy shifts and experience them in very similar ways, even if they happen at different points in time.

You and your twin might be energetic mirror opposites at some points in time and in relation to some dynamics. For instance, in the runner/chaser separation dynamic, one of you is doing the opposite of what the other one is, most likely at the same time. That’s going to involve a difference in maturity and evolution for you, despite the numerous similarities.

Despite the many similarities, in fact, you’ll have definitive differences based on different life experiences and different cultures, family background, environment, education and so on. And yet, at the soul level, the sum of these different experiences will amount to learning most of the same life lessons.

Twin Flames Testing Each Other

You might think that because of all of those similarities, the kindred spirits of twins would live in complete harmony once they do connect in the 3D. It’s quite the opposite for a good chunk of time, especially if they haven’t healed from an array of emotions related to wounds and traumas.

They’ll be testing each other constantly and stepping on each other’s toes, so to speak.

In fact, especially in the beginning stages of the twin flame journey, twins might often be bickering over differences and even similarities. Their interaction is going to bring to the surface all sorts of heightened emotions, some of the hidden emotions that aren’t necessarily a joy to revisit.

The separation phase is very triggering, true, but being together is also likely to be a triggering experience for the twins, particularly in the early stages of harmonizing into a union.

At that point, whatever lower frequencies are still floating about in their soul bond are going to come to the surface in order to be dealt with. These frequencies which are related to the twins being together can’t be resolved while they’re in separation. And they’ll need to be resolved before the twins can truly resolve those frequencies and release the karma connected to them.

All of those things coming out from the heart center are going to lead to a complete understanding of each of their experiences and souls, and eventually, take the intense connection to the level of healed twin flame lovers.

Once the necessary healing and releasing happens, true harmony takes hold of the bond and the actual building blocks of their divine union start to be put in place. These building blocks include true soul-deep trust based on their healed souls and bond. Once the incredible bond of trust between twins is established, it’s going to promote divine harmony between twin flame lovers.

From that point onward, the journey is going to be a synchronized team effort that is going to make accelerated progress towards the final divine union.